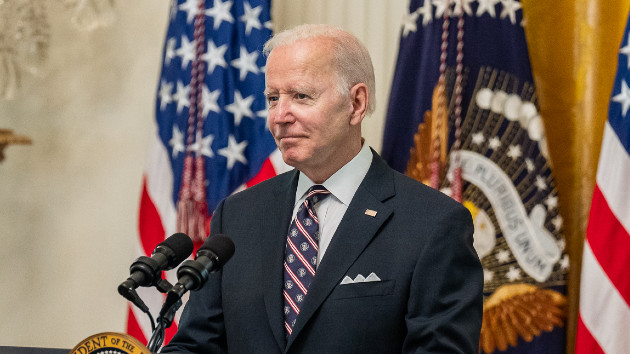 (WASHINGTON) — President Joe Biden “continues to feel well” and is still in isolation after experiencing a rebound case of COVID-19, according to a letter from White House physician Dr. Kevin O’Connor on Monday.

O’Connor wrote in a memo released by the White House that Biden tested positive on an antigen test Monday morning, a result he said “could be anticipated.” Biden had previously tested negative Tuesday evening, Wednesday morning, Thursday morning and Friday morning before again testing positive on Saturday.

“The President will continue his strict isolation measures as previously described,” O’Connor wrote.

“He will continue to conduct the business of the American people from the Executive Residence,” O’Connor added. “As I have stated previously, the President continues to be very specifically conscientious to protect any of the Executive Residence, White House, Secret Service and other staff whose duties require (albeit socially distanced) proximity to him.”

Biden had first tested positive for COVID-19 on July 21 and ultimately reemerged from isolation last Wednesday after testing negative. However, he had been treated with Paxlovid, an effective coronavirus treatment that at times produces a so-called rebound case after a patient finishes a course of it. High-risk patients still face drastically diminished risks of hospitalization after taking Paxlovid.

The letter did not specify any symptoms Biden is feeling, but the president has been asymptomatic since testing positive again Saturday, according to O’Connor’s past memos. Biden previously had a runny nose, cough, sore throat, a slight fever and body aches after testing positive the first time.

Biden had six close contacts before testing positive for COVID for a second time, though the White House has not announced any positive cases from any of those people.

The rebound case comes after Biden last week gave a speech from the Rose Garden praising vaccines and therapeutics.

“We got through COVID with no fear, I got through it with no fear, a very mild discomfort because of these essential, life-saving tools,” Biden said in the Rose Garden. “You don’t need to be president to get these tools used for your defense.”

Biden’s positive test result has interfered with his travel plans across the country in which he had planned on touting newly passed legislation to invest in production of semiconductors and computer chips. The president has also highlighted a recent agreement between Senate Majority Leader Chuck Schumer, D-N.Y., and Sen. Joe Manchin, D-W.Va., on a bill to reduce drug prices, combat climate change and close corporate tax loopholes.