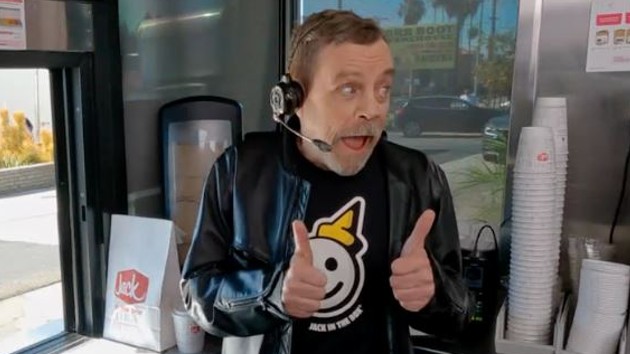 Before he became Luke Skywalker, a young Mark Hamill worked at the fast food chain Jack In The Box — until he was fired for doing voice impressions through the drive-thru window.

“Jack knows he let go of a legend, so they’re making amends,” a rep explains, showcasing the actor in a new campaign called The Return of Mark Hamill.

The spot, which has gone live on social media, shows the big-screen Jedi back in the drive-thru window, this time surprising unsuspecting fans as he explains the inglorious end of his burger-flipping career.

“Instead of using my own voice, I’d use a clown voice,” Hamill said. “They didn’t like it at all.”

His ill-appreciated choice of a clown voice is pretty ironic, considering Jack In The Box’s competitor McDonald’s used a clown, Ronald McDonald, as its mascot for years — and of course because Hamill later created the iconic voice of the Clown Prince of Crime himself, the Joker, in Batman: The Animated Series.