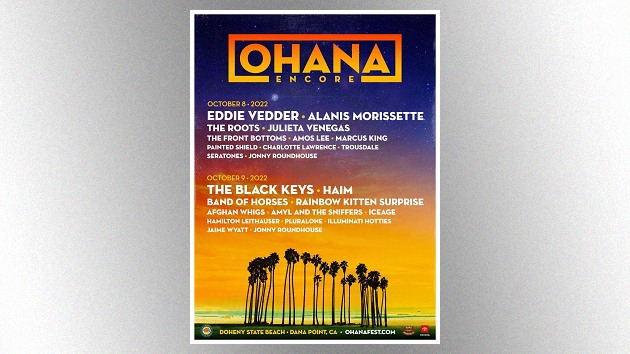 No official announcement was made, but the Ohana website no longer lists the Encore event. Additionally, the festival’s FAQ section states that those who purchased tickets to Ohana Encore will be automatically refunded.

According to Spin.com, ticketholders received an email saying that Ohana Encore was canceled due to “circumstances beyond our control.”

Ohana Encore was set to take place October 8-9 in Dana Point, California with performances by Vedder, The Black Keys, Alanis Morissette and HAIM. Ohana Festival, meanwhile, will be held in Dana Point from September 30 to October 2 with headliners Vedder, Jack White, Stevie Nicks and Pink.

Meanwhile, Pearl Jam has been dealing with a host of cancellations as Vedder recovers from vocal issues stemming from a Paris performance besieged by the European heat wave.