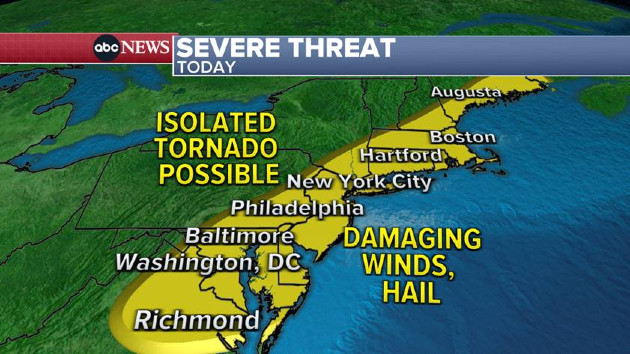 (NEW YORK) — As the heat hovering over much of the country continues, residents on the East Coast will soon have another extreme weather event to contend with: severe storms.

More than 52 million people living along the Interstate 95 corridor will be under threat of severe thunderstorms on Monday afternoon.

As the storm system moves east, it will effectively end a nearly weeklong heat wave from Boston to Washington, D.C.

Records for heat were broken over the weekend in Newark, New Jersey, which hit 102 degrees for the fifth day in a row, breaking the all-time record for consecutive days over 100. Boston surpassed its record at 100 degrees, Philadelphia broke its record at 99 degrees and Providence, Rhode Island, did the same at 98 degrees. New York City’s LaGuardia Airport tied its heat record at 98 degrees.

Heat alerts remained in the Northeast on Monday, with hot and humid conditions from Maryland to Massachusetts.

Monday afternoon, a cold front is expected to pass through the region with severe thunderstorms, damaging winds, hail and the possibility of isolated tornados.

There will be a break in the heat following the storm system with temperatures in the Northeast staying in the 80s over the next several days.

However, scorching conditions will continue Monday afternoon in the Pacific Northwest, down the coast to central and Southern California and stretching to the Midwest, Plains and Southeast.

A strong push of monsoon moisture into the Southwest will bring elevated threats for flash flooding Monday and through the week. Flood watches have been issued for Arizona, Utah, New Mexico and Colorado.