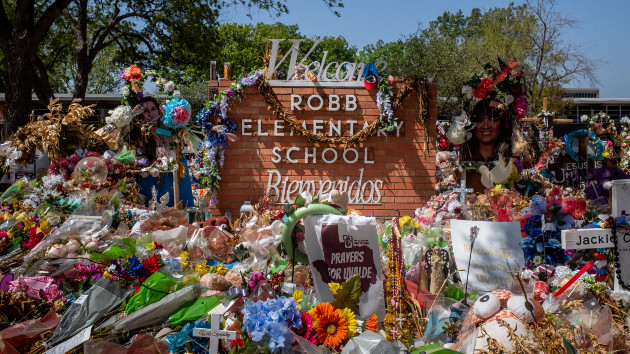 (UVALDE, Texas) — Poor Wi-Fi service and a staff desensitized to alerts by frequent notifications diminished the effectiveness of Robb Elementary School’s digital emergency system during the May 24 massacre there, hampering teachers’ ability to swiftly secure their classrooms and students, according to an investigative report published Sunday.

The emergency alert system, called Raptor, was implemented by Uvalde’s school district in February 2022 to disseminate information about on-campus or nearby police activity. But on May 24, the alert system failed to sufficiently warn staff as a gunman approached the school and killed 21 people, the report found, even after the school’s principal triggered it.

“If the alert had reached more teachers sooner, it is likely that more could have been done to protect them and their students,” concluded the report, which was prepared by a special committee of the Texas state legislature.

Raptor Technologies, the Houston-based company that developed the emergency alert service used at Robb, pushed back against some of the committee’s findings, including details about when the first alert notification was transmitted.

David Rogers, the firm’s chief marketing officer, told ABC News that the report “paints an ambiguous and potentially misleading picture of the degree to which the data communication infrastructure was performant during the incident,” and said the committee did not request their data or input before publishing its report.

The alert system was just one of many procedures that together failed to prevent the shooter from entering the school. In their investigative report, lawmakers noted that many of the shortcomings identified at Robb — including how it handled its emergency alert system — exist elsewhere in the state.

“We must not delude ourselves into a false sense of security by believing that ‘this would not happen where we live,’” according to the report. “The people of Uvalde undoubtedly felt the same way.”

Beyond the myriad of missteps on the part of law enforcement and the school district to adequately prepare for an active shooter event, the lawmakers’ report offered new details about how administrators sought to use the Raptor system during the siege with varying degrees of success. Patchy wireless connection at Robb Elementary delayed sending and receiving alerts, the report said, and an influx of notifications in recent months “diluted” the seriousness of the lockdown warning.

Difficulties with the digital alert app began almost immediately, the committee found. After hearing from a teacher who witnessed the gunman approach the school, Robb Elementary School Principal Mandy Gutierrez “attempted to initiate a lockdown on the Raptor application, but she had difficulty making the alert because of a bad wi-fi signal,” according to the report.

Rogers, the Raptor executive, again disputed this claim from the committee, telling ABC News that the report “appears to imply that the lockdown was ‘attempted’ but not successfully initiated.”

“If that was the intended implication of the House Report,” he continued, “that would be inaccurate.”

Rogers said the firm’s internal system log data, which was shared with ABC News, confirmed that a “lockdown” alert was successfully transmitted at 11:32 a.m. — one minute before the shooter entered the school building. The committee’s report also noted that at least one teacher inside the school successfully received a lockdown alert at 11:32 a.m.

“Within seconds” of the alert being generated, Rogers said, 91 “critical notifications,” which are similar to an Amber Alert, 68 text messages and 136 emails were sent to “all configured user devices” associated with the Robb community. Rogers added that several teachers communicated amongst themselves using the app’s “group chat” function as the shooting unfolded.

With regard to Wi-Fi challenges cited by the committee, Rogers said Raptor’s alert system relies on devices that use cellular networks and wired connections, too — but said school districts are the ones responsible for ensuring strong Wi-Fi signals.

Once Gutierrez’s lockdown alert was successfully transmitted, the committee reached another troubling conclusion: many teachers likely ignored it. According to the report, the high volume of Raptor alert notifications about off-campus police activity in the weeks and months leading to the May 24 shooting “diluted the significance of alerts and dampened everyone’s readiness to act on alerts.”

Between February and May 2022, according to the report, staff members received more than 50 alerts — a frequency that “contributed to a diminished sense of vigilance about responding to security alerts,” the committee said.

Most of those alerts were in response to what the committee described as nearby “bailouts,” referring to incidents when undocumented immigrants flee their vehicles and attempt to outrun police. Because of Robb’s proximity to the U.S.-Mexico border, these so-called bailout events happen often.

“The series of bailout-related alerts led teachers and administrators to respond to all alerts with less urgency—when they heard the sound of an alert, many assumed that it was another bailout,” the committee reported.

Rogers said that Raptor is “actively working” with the Uvalde school district to make modifications to its platform so that “bailout” incident alerts would have a different notification setting, “so as to be clearly differentiated from other categories of emergencies.”

Even so, the committee added that many teachers “did not always reliably receive” the alerts for a number of other reasons, including “poor wi-fi coverage, phones that were turned off or not always carried, and employees who had to log-in on a computer to receive a message.”

In at least one instance during the shooting, the Raptor system worked as planned. Jennieka Rodriguez, a fourth-grade teacher in classroom 105, told the committee that she received a lockdown alert on her phone at 11:32 a.m. — just one minute before the gunman entered the school.

“[Rodriguez’s] students knew what to do and where to hide,” according to the report. “She stepped outside and checked her classroom door to ensure it was locked. As she did so, she looked across the hall and locked eyes with another fourth-grade teacher, Ms. [Irma] Garcia, who was locking the door to her classroom, Room 112.”

Moments later, the gunman entered the school and stormed classroom 112, killing Garcia and her students.