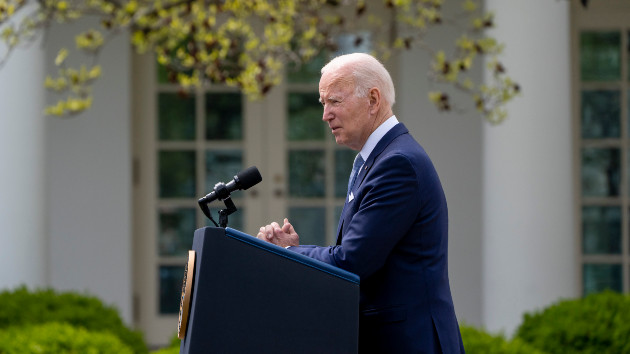 (WASHINGTON) — President Joe Biden is expected to announce on Wednesday a few executive actions to address climate change, with a focus on helping Americans facing extreme heat — but the steps fall far short of the more sweeping measures climate activists are calling for.

In fact, the directives largely appear to provide more funding to or otherwise strengthen existing programs.

According to the White House, the president’s latest set of executive actions will include “protecting communities facing extreme heat with additional FY22 funding for FEMA’s Building Resilient Infrastructure and Communities (BRIC) program and additional guidance to support the Department of Health and Human Services Low Income Home Energy Assistance Program (LIHEAP).” The BRIC program offers funding to communities for hazard mitigation, while the LIHEAP provides low-income Americans with assistance in covering their energy costs.

The White House said Biden will also announce “additional actions to boost the domestic offshore wind industry.” Further information on those actions was not immediately available, and it was unclear whether they would be new or impactful.

Biden will make the announcements while visiting a now-defunct coal-fired power plant, called Brayton Point, in Somerset, Massachusetts. The site is expected to be turned into a manufacturing plant that will produce transmission cables for Massachusetts’ offshore wind industry, according to the White House.

“The President ran on fighting the urgent economic and national security threat of climate change, and tomorrow’s actions will be a continuation of the decisive steps on climate that the President has taken since day one,” a White House official said. “In the coming days, he will continue to announce executive actions that we have developed to combat this emergency.”

While Biden does not plan to declare a climate national emergency this week, that option is “still on the table,” White House press secretary Karine Jean-Pierre told reporters Tuesday.

The Biden administration’s efforts to continue to pivot the U.S. power sector toward zero-emission energy options, such as off-shore wind, move the country in the right direction but don’t address the larger problem of cutting and reducing current energy-based emissions from the existing fossil fuel industry. Without continuing to cut and reduce current emissions from a range of polluting areas, it will take much more than empowering renewable energy and improving building efficiency to reach Biden’s climate goals.

Wednesday’s announcements come as people across the United States — and around the world — grapple with sweltering temperatures this week. A scorching airmass remains over the majority of the continental U.S. on Wednesday, with a heat dome sitting over the Southwest and Great Plains and triple-digit temperatures stretching throughout the Midwest and up and down the East Coast.