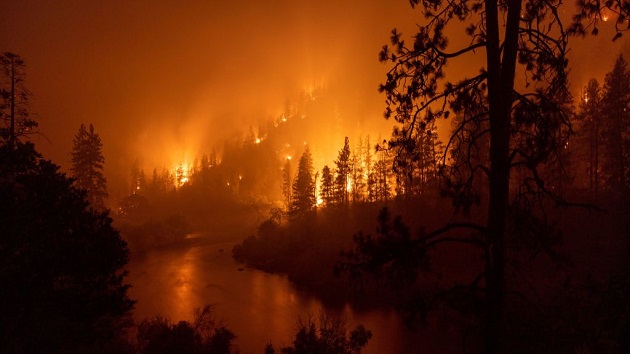 The death toll from the McKinney Fire burning in the Klamath National Forest near the Oregon border now stands at four after search teams discovered two bodies Monday at separate residences on the perimeter of the blaze along Highway 96, according to the Siskiyou County Sheriff’s Office.

The grim discovery comes after two people were found dead over the weekend in their car in a driveway in the town of Klamath River, according to the sheriff’s office. Officials believe they were trying to flee the fire when they were killed.

Meanwhile, firefighters battling the enormous blaze in Northern California’s Klamath National Forest are simultaneously fighting another growing fire in the same drought-dry forest, officials said. The China2 Fire is burning about 60 miles away near the community of Happy Camp.

Both blazes in Siskiyou County were 0% contained Tuesday morning. The McKinney fire, near the small town of Yreka, grew by nearly 700 acres overnight to 56,165 acres, officials said.

Fanned by erratic winds, the China2 Fire ignited Friday, the same day as the McKinney Fire, and has been more of a slow burn compared the rapid pace of the larger blaze, according to Cal Fire’s latest incident reports. The China2 Fire has grown from roughly 300 acres on Saturday to nearly 2,000 acres by Tuesday.

Joel Brumm, a spokesperson for the Klamath National Forest, told ABC News that a federal team of firefighters is being moved from the McKinney Fire on Tuesday to help battle the China2 blaze.

“They’re trying to keep the fire from crossing Highway 96 at any point,” said Brumm. Highway 96 has been closed in the area since both fires started.

While rainfall on Monday night and into Tuesday morning kept the McKinney Fire’s growth minimal, no rain was reported in the China2 Fire, Brumm said.

“They didn’t have that precipitation, so they were still seeing active burning last night, active flames,” he said.

Red Flag fire danger warnings have been issued for Tuesday in the area of the McKinney Fire due to possible thunderstorms, strong winds and lightning, according to Brumm, who described the McKinney Fire “as creeping and smoldering at this moment.”

“The moisture with the thunderstorms can be helpful, but you can get these winds up to 40 and 50 mph, which can catch an ember, bring it back to life and really cause this fire to move quickly,” he said.

The McKinney Fire is burning through a tinderbox of high dry grass, brush and timber and is now the largest wildland fire in the state this year, surpassing the Oak Fire in Mariposa County near Yosemite, according to Cal Fire. The Oak Fire, which started on July 22, was 76% contained on Tuesday after burning 19,244 acres and destroying 182 structures, including more than 100 homes, officials said.

About 3,000 residents, including some on the west side of Yreka, have been evacuated due to the McKinney Fire’s proximity to the town.

“Crews were able to work successfully behind the city of Yreka, bringing dozer line along the ridge to protect the structures,” Cal Fire said in its incident report released Tuesday morning.

Many of the homes and structures damaged or destroyed by the McKinney Fire were in the community of Klamath River, about 33 miles west of Yreka.

“It’s devastating,” Chief Janet Jones of the Klamath River Volunteer Fire Department, told ABC News. “We don’t have the resources that larger cities do. The people won’t be able to rebuild.”

ABC News’ Will Carr and Jenna Harrison contributed to this report.