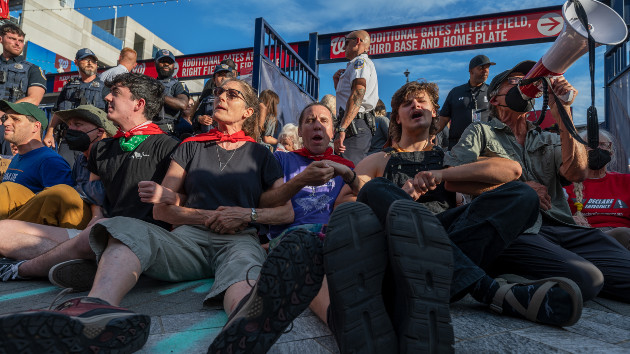 (WASHINGTON) — Despite Wednesday’s news of a potential billion-dollar Senate climate deal, environmental activists still appeared at Thursday night’s annual Congressional Baseball Game in the hope that President Joe Biden and congressional Democrats will follow through on their climate promises, though at a much smaller scale than anticipated.

U.S. Capitol Police and Washington’s Metropolitan Police Department said earlier this week that they were aware of potentially hundreds of protesters and would have an increased presence in the area of Nationals Park, where the century-old charity event is taking place.

The climate activists want Democrats to immediately pass the newly announced energy investments — brokered, per a late Wednesday announcement, between West Virginia Sen. Joe Manchin and Majority Leader Chuck Schumer as part of another spending bill via reconciliation — and for Biden to declare a climate emergency.

The protest was planned as anger mounted against Manchin, one of the most conservative Democrats in the 50-50 Senate who earlier this month seemingly closed the door on climate negotiations in the next spending package, saying he could not support the environmental provisions of Democrats’ bill because of historic inflation.

“Hopeful that both actions can be taken swiftly, activists will continue pushing until Democrats’ climate promises are signed, sealed, and delivered,” Now Or Never, the group of climate organizations organizing Thursday’s protest, said in a statement.

A spokesperson for the Chesapeake Climate Action Network, a Now Or Never member, said the group was “very surprised” at the successful climate negotiations.

“We didn’t anticipate that announcement to happen at that hour,” Quentin Scott told ABC News. “We’re very encouraged by what the Senate and President Biden announced last night, and we support those negotiations. And so far, the text looks pretty solid, but not perfect.”

Scott and Chesapeake Climate Action Network decided a few hours before the baseball game that they would not be protesting. Another Now Or Never spokesperson said the demonstration would be “significantly different” after the announcement of climate provisions advancing in the spending bill.

On Wednesday, more than 300 people had registered to attend the protest. Upwards of 75 were seen gathered after the start of the game.

“We have decided not to protest tonight’s Congressional Baseball Game. Congressional leaders have declared they intend to meet many of our climate and justice demands, so we’ll be attending the game tonight just to urge Congress to seal the deal and to ask Joe Biden to still declare a climate emergency,” Chesapeake Climate Action Network Director Mike Tidwell said in a statement.

If passed, the Manchin and Schumer agreement, known as the Inflation Reduction Act, would be perhaps the largest clean energy package in U.S. history. Senate Democrats hope to approve it before the August recess begins next week — a daunting time-crunch, given other pressures.

The climate bill, which also includes major health care and corporate tax provisions, would spend about $370 billion for climate and energy programs over the next 10 years, such as using tax credits to incentivize consumers to buy electric cars, fund the domestic manufacturing of batteries and solar panels and allocate spending for other environmental initiatives.

Thursday’s event organizers had warned that if Congress did not act on climate legislation by Sept. 30, they were planning a separate, “highly disruptive, mass direct action that fundamentally disrupts business-as-usual in D.C.”

“If Congress passes the deal that they announced yesterday, then it’s very unlikely that we will go ahead with a future action. But we also reserve the right to come back if somehow this deal falls apart and actually carry through those escalated actions,” Scott told ABC news.

District police said in a statement they were aware of potential protests and would have an increased presence in the area “to ensure the safety and security of the event.”

U.S. Capitol Police Chief Tom Manger wrote on Twitter on Wednesday that his officers had a “robust security plan in place” for the game.

“We are aware that demonstrators are planning to protest political issues at the Congressional Baseball Game for Charity. Our mission is to protect the Members of Congress during this family event, so we have a robust security plan in place,” Manger wrote.

“We urge anyone who is thinking about causing trouble at the charity game to stay home,” he wrote. “We will not tolerate violence or any unlawful behavior during this family event.”

Thursday’s demonstration also comes after the arrest of six congressional staff members for sitting in the office of Senate Majority Leader Schumer, urging him to keep negotiating on the climate provisions that were later revived with Manchin.

“Our first demand was to reopen climate negotiations which were considered dead for July — and they did!” he said. “So it is a big big win, now we need to fight to improve the policy and fight to pass it.”

The Congressional Baseball Game is a bipartisan tradition dating back to 1909, with proceeds supporting D.C.-area charities. The annual game has been under threat before. In 2017, at a practice for Republican lawmakers, then-House Majority Whip Steve Scalise, R-La., and Capitol Police officer Crystal Griner were shot.