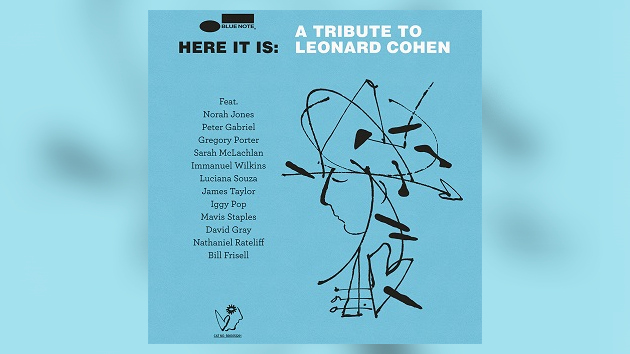 James Taylor, Peter Gabriel and Mavis Staples are among the artists who have lent their talents to Here It Is: A Tribute to Leonard Cohen, a 12-track album celebrating the late legendary Canadian singer/songwriter.

The album was produced by Larry Klein, Joni Mitchell‘s ex-husband and main producer since the 1980s. Here It Is features versions of a mix of well-known and more obscure songs by Leonard Cohen, spanning from his 1967 debut album through 2016’s You Want It Darker, which was released shortly before his death.

Taylor’s cover of “Coming Back to You” is available now as an advance digital track.

Taylor says of the tune, “Like so much of Leonard Cohen’s writing, this lyric resonates deeply with his forlorn and hopeless take on the bleak landscape of love and attachment. So, breathe a deep sigh and, drink up …”

Klein says he decided to organize the album for his close friend Cohen after realizing he’d been covering his songs with other collaborators. He assembled a group of respected jazz musicians and brought in guest singers to create reworked versions of Cohen’s tunes.

“It was an immensely gratifying experience to recontextualize these poems, and shine a different light on them,” Klein notes.

You can preorder Here It Is now. It will be available October 14 on CD, vinyl and digital formats.