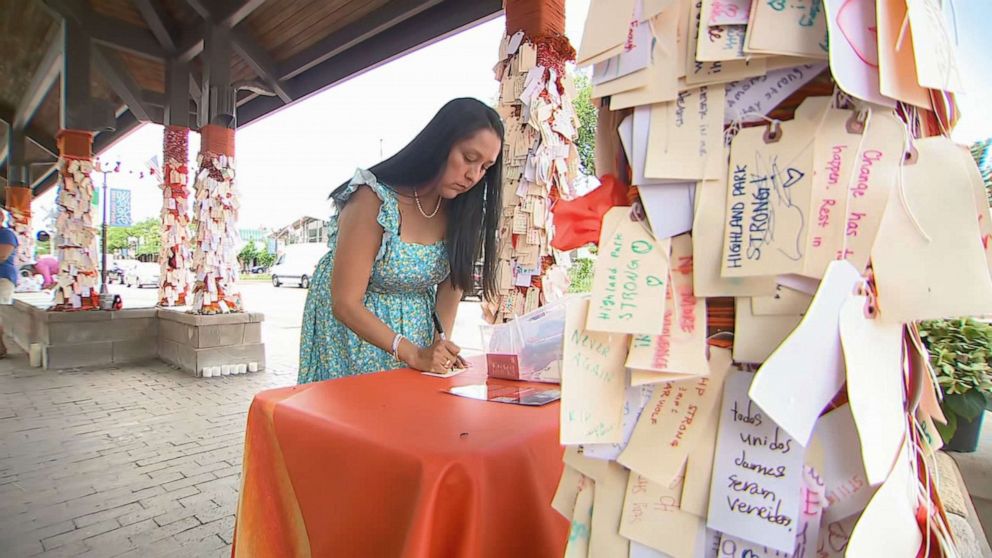 (CHICAGO) — Ashbey Beasley said the horrors of the July Fourth mass shooting are still fresh in her mind.

The Highland Park, Illinois, native was at the Independence Day parade with her 6-year-old son when the gunman opened fire. The two ran for their lives.

“The look on his face was indescribable. It was such a sheer, primal sense of terror,” she told “NIGHTLINE.”

While she and her son were not hurt during the carnage, Beasley said the mental anguish remains and she is devoting her life to stopping gun violence.

On Wednesday, Beasley took her case straight to lawmakers in Washington, D.C. She was on hand for a congressional hearing with gun manufacturers and gave video testimony about her experience during the mass shooting.

Beasley told “NIGHTLINE” that she has become more active in promoting gun control policy because she is tired of people living in fear of something unavoidable.

“The idea that we, as a country, cannot go to a mall without the idea creeping in the back of our heads that someone could shoot us is unacceptable,” she said. “That we are scared to send our children to school with fear that they won’t come home is unacceptable.”

Gun manufacturer executives were in the hot seat when congressional members grilled them about the roles their companies’ weapons played in recent mass shootings.

Many of the executives acknowledged the violence and those hurt by it, but contended that they didn’t want to deprive Americans of their Second Amendment rights.

“I believe our nation’s response needs to focus not on the type of gun, but on the type of persons who are likely to commit mass shootings,” Marty Daniel, the founder and CEO of Daniel Defense, testified.

Daniel Defense made the rifle used in the mass shooting in Uvalde, Texas, where 19 students and two teachers were killed at Robb Elementary School on May 24.

Gun control advocates, like Ryan Busse, a senior adviser with Giffords, testified that weapons makers are not doing enough to prevent their guns and rifles from proliferating among the populace.

Busse, a former gun manufacturer executive, told “NIGHTLINE” the industry has “established irresponsible marketing” which creates and propagates the violence.

“I’m a proud gun owner… I hunt and shoot with my boys every chance I get, but we have gone far off the rails with regard to balancing responsibility and decency,” Busse said. “And part of being a responsible citizen, especially a gun owner with a right that immense means that we have to balance that kind of right with responsibility and regulation. And we have an industry who is thwarting that at every chance we get and our society, our country is paying the price for it.

Beasley echoed this message when she spoke with several members of Congress, including Rep. Clay Higgins, R-La.

Higgins contended during the hearing that if there was a ban on assault rifles, federal agents will be shot when they go to confiscate the rifles.

“When those gunfights happen, that blood will be on your hands,” Higgins told the Democratic members of the committee.

Higgins repeated his claims during his exchange with Beasley in the halls of the Capitol.

“If you don’t think they will come door to door to seize your weapons, you’re wrong,” he told Beasley.

“I was a SWAT cop for 12 years,” the congressman responded.

“So, you know what these bullets are,” Beasley said.

Beasley said she does not feel intimidated standing up to elected officials and speaking out on gun control. She reiterated that she’ll continue to do so. And Beasley said she won’t be alone in her mission.

“There is a whole contingency of women and parents and moms and community members who have gone to D.C. who are going to continue to fight and are getting more involved every day,” she said.