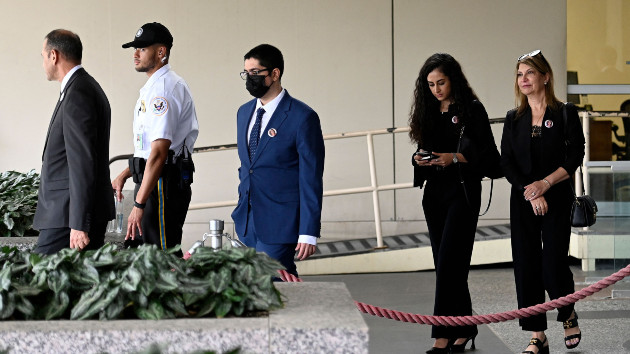 Blinken had previously spoken to Abu Akleh’s relatives via telephone, but Tuesday was their first in-person meeting. The family traveled from their home in Israeli-annexed east Jerusalem to meet with him at the U.S. Department of State in Washington, D.C.

While the meeting was ongoing, State Department spokesperson Ned Price told reporters during a press briefing that Blinken would “use the opportunity to underscore for Shireen’s family our deepest condolences on her tragic death and to reiterate the priority we attach to accountability — something we continue to discuss with our Israeli and Palestinian partners as well.”

“It is a priority for us that we see appropriate accountability,” Price added.

Lina Abu Akleh, the journalist’s niece, took to Twitter after the meeting with Blinken, saying: “Although he made some commitments on Shireen’s killing, we’re still waiting to see if this administration will meaningfully answer our calls for #JusticeForShireen.”

“Accountability requires action,” she tweeted. “We look forward to a US investigation that leads to real consequences. Shireen was my aunt and the voice of Palestine and she was killed by an Israeli soldier.”

She said her family also stressed to Blinken the importance of a meeting with U.S. President Joe Biden, who tested positive for COVID-19 last week.

“A meeting with him will demonstrate to our family that Shireen’s case is a priority for this administration,” she tweeted. “Since he didn’t meet with us in Jerusalem, we came to DC. We need him to hear from us directly.”

Abu Akleh, a veteran 51-year-old journalist working for Al Jazeera, was killed on May 11 while on assignment covering an Israeli military raid in the occupied West Bank. The Israeli Defense Forces said exchanges of gunfire erupted between Israeli soldiers and Palestinian militants, and Abu Akleh, who had been wearing a protective vest identifying her as a member of the press, was shot in the head. She was rushed in critical condition to a local hospital, where she was pronounced dead.

Abu Akleh’s death has sparked controversy as Palestinians claimed she was killed by Israeli gunfire, while the Israeli Defense Forces steadfastly denied that was the case.

So far, the United States has served as sort of an intermediary between separate Israeli and Palestinian investigations. The U.S. Security Coordinator’s office in Israel, which monitors Israeli and Palestinian security arrangements, recently analyzed the full investigations carried out by authorities on both sides and determined that gunfire from Israeli positions likely killed Abu Akleh but appeared to be unintentional.

Earlier this month, in an exclusive statement to Politico, Abu Akleh’s family called those findings “an affront to justice,” claiming it “enabled Israel to avoid accountability for Shireen’s murder.” They also accused the White House of failing to take their concerns seriously.

Abu Akleh’s family made clear on Tuesday that they want the Biden administration to launch its own probe into the circumstances surrounding her death. But the State Department showed no sign of reevaluating its stance.