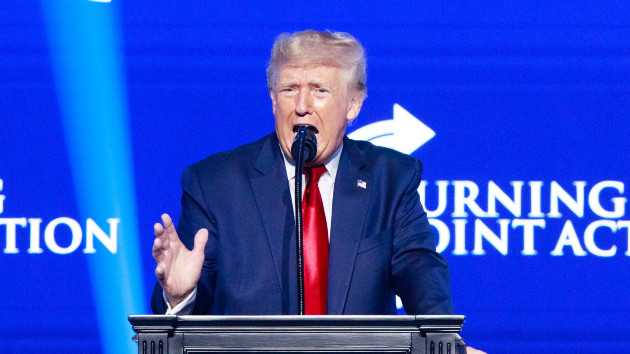 (WASHINGTON) — Former President Donald Trump returns to Washington on Tuesday for the first time since leaving office in the shadow of the Capitol insurrection to deliver remarks to ultra-conservative allies at the America First Agenda Summit.

Trump’s return, at a two-day conference hosted by the America First Policy Institute, a MAGA-aligned group formed when he took office, comes as he publicly teases a 2024 presidential run — and amid a congressional investigation into his actions surrounding the deadly rioting last year by his supporters at the Capitol, which led to his historic second impeachment. (He denies wrongdoing.)

With Cheney vowing the committee will hold more hearings in the fall, saying, “The dam has begun to break,” the panel also weighs whether to send a criminal referral to the Justice Department.

A referral is not required for federal authorities to charge Trump himself, nor will one guarantee such a move. But public hearings outlining Trump’s “seven-point plan” to overturn the 2020 presidential election have amped up pressure on Attorney General Merrick Garland to bring a federal criminal case against Trump — which would be the first in history against a former president.

Trump is already facing a civil investigation in New York, by state Attorney General Letitia James, into his family’s real estate business practices; she has argued her office found “significant evidence” of fraud and Trump and some of his children are set to be deposed by investigators. (Trump has claimed James is politically motivated.)

Separately, Sen. Graham, only after a subpoena, will appear before a grand jury in Georgia as part of the Fulton County district attorney’s ongoing investigation into efforts to overturn the 2020 presidential election results in the state.

The simultaneous probes show how Trump’s legal problems continue to loom over a possible 2024 comeback bid.

The only modern president who has refused to concede defeat, Trump can be expected to lament his 2020 election loss in his address on Tuesday at 3 p.m. ET, though organizers said in a release that his speech will be focused on “America First” policy.

But on the eve of Trump’s return, it was his former Vice President Mike Pence who intended to take the attention of the Republican Party, planning to tout his “Freedom Agenda” in remarks on Monday at the Heritage Foundation that were ultimately canceled due to weather.

Pence and Trump’s appearances further highlight their estrangement-turned-rivalry, as both have thrown their support behind competing candidates in state primary races. In Arizona last week, Pence joined a term-limited Gov. Doug Ducey to rally for Karrin Taylor Robson, widely seen as the establishment GOP candidate in the open race for Ducey’s seat; while Trump campaigned for Kari Lake, a former TV reporter-turned-“Ultra MAGA mom.”

In May, Pence and Trump stumped for opposing candidates in the GOP primary to be Georgia’s governor, with the Pence-backed incumbent, Brian Kemp, soaring to victory over Trump’s pick, former Sen. David Perdue.

Last week in Maryland, Trump’s pick, state Del. Dan Cox — who criticized (and then apologized for criticizing) Pence as a “traitor” after Pence didn’t reject the 2020 results — won the GOP governor’s primary, to the ire of term-limited Republican Gov. Larry Hogan, who backed a more moderate candidate and appears to have presidential aspirations himself.

Hogan told ABC News’ This Week co-anchor Jonathan Karl on Sunday that some in the Republican Governors Association were “very concerned” about Trump potentially launching a 2024 presidential bid before November’s midterm races, which Hogan said could upend contests across the country.

“I think most people are very concerned about the damage it does to the party if he announces now,” he said. “And it may help in very red states or very red districts. But in competitive places and purple battlefields, it’s going to cost us seats if he were to do that.”