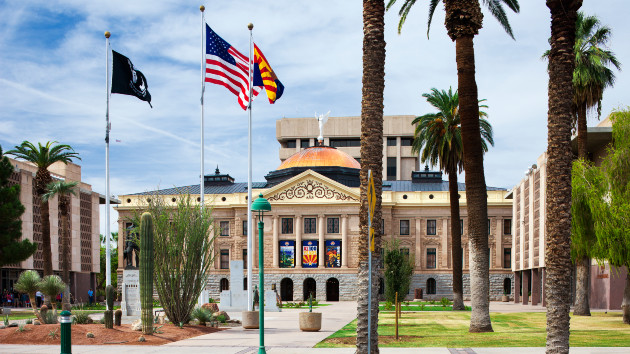 (PHOENIX) — Ahead of Arizona’s Aug. 2 primary, Republican voters in the battleground state say they remain torn over former President Donald Trump’s place in the party — as he and his estranged former Vice President Mike Pence support dueling candidates in the GOP governor’s primary.

At a banquet-style event in Peoria on Friday with roughly 350 guests, Pence joined a term-limited Gov. Doug Ducey and GOP secretary of state candidate Beau Lane to support gubernatorial hopeful Karrin Taylor Robson, a wealthy donor and former member of the Arizona Board of Regents widely seen as the establishment candidate.

On the heels of another prime-time Jan. 6 hearing, Pence only mentioned Trump once in his 21-minute speech to tout their accomplishments — careful not to break fully from the former president in public but taking a quick swipe at Trump’s chosen candidate, Kari Lake, saying, “There are those who want to make this election about the past.”

That day, at a rally across the state, Trump and Lake, a former TV journalist-turned-“Ultra MAGA mom,” called President Joe Biden’s victory “illegitimate” and likened the former president to “Superman” before an energized crowd of thousands.

In interviews with ABC News, voters at a Lake town hall on Saturday expressed frustration with Pence for supporting Robson and for fulfilling his constitutional duty to certify the 2020 presidential election.

“To me, it just reiterated my disappointment in Pence,” said LeAnna Perez, a teacher for deaf and hard-of-hearing students from Louisiana who moved to Arizona in February and will be voting in her first election in the state next week. “I’m done with Mike Pence. He’s proving who he truly is.”

A half-dozen Republicans in Arizona told ABC News that while they support Trump’s “America First” policies, they are split on whether he is the right person to deliver them in an already polarized political climate.

“Whoever he is sponsoring is going to have a hard time in the primary and in the general election,” said Anastasia Keller, a lifelong Republican, Arizonan and small business owner who supported Trump in 2020.

Keller added that she had relatives break off from him: “They really liked Trump and what he stood for, some of the things that he accomplished, but the mean tweets and the overall attitude — I just don’t think that he can bring the country together.”

Pence, formerly Trump’s loyal No. 2, has become one of the most prominent GOP politicians with a contrasting style — endorsing a range of local candidates even against the Trump-endorsed picks, as he did when he stumped for Georgia Gov. Brian Kemp over primary challenger David Perdue.

Lake is the odds-on favorite for the gubernatorial nod, but Robson has seen a surge in polling in recent weeks with former Arizona Rep. Matt Salmon dropping out of the race to back her and blast Lake. But Lake would face an uphill battle in the general election in a state that has shifted blue, with the likely Democratic nominee, Secretary of State Katie Hobbs, singling out Lake over Robson in most of her attack ads.

One outside strategist in the Arizona governor’s race argued that Trump’s brand in the state was tarnished given Democrats’ victories in the state in 2018 and 2020.

“Kari Lake embodies the Trump experience. … She has taken the Trump playbook and [tried] to replicate what Trump did nationally in Arizona,” said GOP strategist and lifelong Arizonan Barrett Marson. “But Trump lost in 2020 in Arizona.”

According to a recent New York Times/Siena College poll, nearly half (49%) of Republicans said they wanted Trump to seek a second term. But the other half of those surveyed told the Times that they wanted someone else to get the Republican nomination in 2024 and 16% of GOP voters said they would never vote for Trump.

Voters at Lake’s event over the weekend said they would back Trump in 2024 — but also praised Florida Gov. Ron DeSantis, who is at 25% among GOP primary voters, according to the Times poll.

Jason J. Baker, who works for DoorDash and a Christian film company, said Trump has his vote “unless there’s a candidate that just blows him away.”

“It would be kind of close for me, because I’m a huge supporter of Gov. DeSantis, and if [South Dakota] Gov. Kristi Noem was to ever run, she’d pretty much have my vote from the announcement,” Sanchez said.