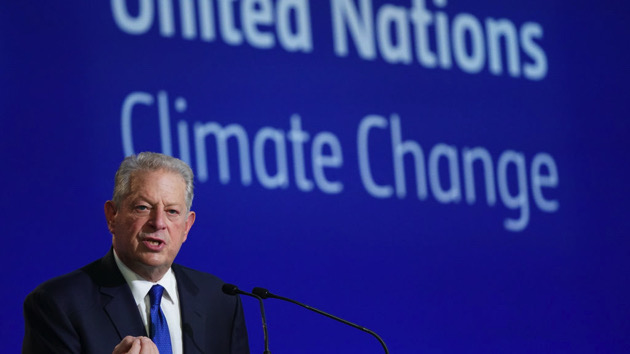 (NEW YORK) — Former Vice President Al Gore said Sunday that now is the time to act on climate change as the U.S. experiences record heat and wildfires rage across Europe.

“They’re saying that if we don’t stop using our atmosphere as an open sewer, and if we don’t stop these heat trapping emissions, things are gonna get a lot worse,” Gore told ABC This Week co-anchor Jonathan Karl. “More people will be killed and the survival of our civilization is at stake.”

“That’s why the heat records are being broken all the time now,” he said. “That’s why the storms are stronger, why the ice is melting and the sea levels rising and why the droughts and fires are hitting us so hard and so many other consequences.”

President Joe Biden recently announced several executive actions to address climate change but didn’t include what activists sought most: a declaration of a national climate emergency.

When asked if Biden should declare an emergency, Gore said he’ll “leave it to others to parse the pros and cons” of such action. But there is more Biden can do, he said.

“The EPA can take action to further limit emissions from power plants and from tailpipes, and the Supreme Court decision did not take all their power away,” Gore said. “We could stop allowing oil and gas drilling on public lands, and he could appoint a new head of the World Bank instead of the climate denier that leads it now, appointed by his predecessor.”

But Karl noted a recent focus of the Biden administration has been lowering gas prices, which has meant asking countries to ramp up oil production.

“Isn’t this counterproductive in terms of the climate agenda?” Karl asked.

“This should be a moment for a global epiphany, and the voters and the publics in countries around the world need to put a lot more pressure on their political leaders,” he said. “Don’t forget the fact that all 50 of the Republican senators have been against doing anything on climate, even though the vast majority of the American people want it.”

Gore also praised the work of the Jan. 6 committee after a witness this week invoked his conduct in conceding the 2000 election.

“I think these hearings have been the most persuasive and effective since the Watergate hearings so long ago,” Gore said, “and I think we’re seeing a huge impact on public opinion in our country, too. They’ve done an incredible job.”

Matthew Pottinger, a national security official in the Trump White House, said in live testimony that Gore may have disagreed with the Supreme Court’s decision that ended his presidential bid but he “gave a speech of concession … where he said this is for the sake of the unity of the U.S. as a people and for the strength of our democracy.”

“His speech actually is a good model for any candidate for any office, up to and including president, and for any party to read, particularly right now,” Pottinger said.

Gore said Sunday that he simply did what the Constitution required.

“What was it personally difficult?” Gore said. “Well, you know, when the fate of the country and the traditions and honor of our democracy are at stake, it’s not really a difficult choice.”