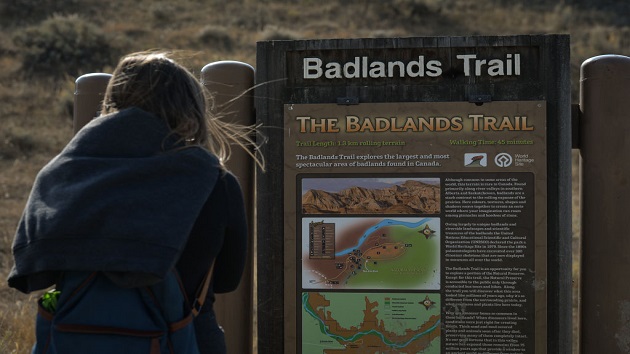 Maxwell Right, of St. Louis, was following an unmarked trail with a friend when he collapsed Wednesday and died of suspected heat exhaustion and exposure, the Pennington County Sheriff’s Office said.

The friend was flown to a hospital for treatment, a park official told ABC News on Saturday. The official, Superintendent Brenda Todd, said she did not know his condition.

The sheriff’s office initially said the two were on a trail that had been featured in a social media challenge, but later clarified that they were simply following a trail on a hiking app.

A spokesperson for the university, Andrew Careaga, told ABC News that records show a Maxwell Right graduated in May with a bachelor’s degree in information and technology.

The Badlands experienced record temperatures this week, according to Todd, who said the area reached 108 degrees on Monday before cooling off slightly on Wednesday.

“It’s real hot. There’s no shade. It can just really get to you quickly,” she said, adding that hikers should go early in the day and bring plenty of water.

“There’s no water out in the Badlands, generally speaking,” Todd said. “You can’t rely on your GPS out here and cell phone service can be really spotty.”

At least two other fatalities were reported in national parks this week amid extreme heat.

A 75-year-old man from Houston was found dead on a trail in Big Bend National Park in Texas on Thursday evening, park officials said. There was no obvious cause of death, though officials noted in a statement that temperatures along the trail exceeded 104 degrees Thursday afternoon.

On Tuesday, the body of a man who had been reported overdue from a hike in Canyonlands National Park Sunday evening was found, park officials said. County officials are investigating the death. Park officials said in a statement on the fatality that visitors are “strongly encouraged to plan ahead and prepare for extreme heat” during the summer.