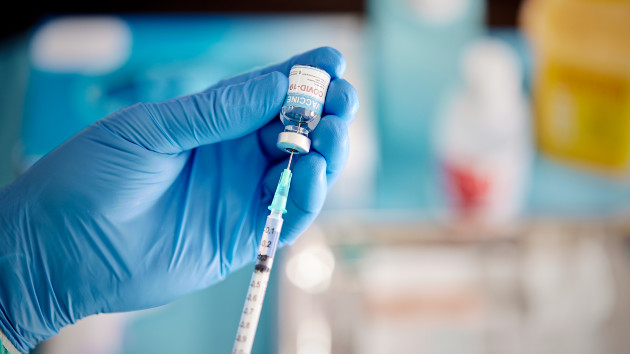 (NEW YORK) — Amid growing concerns over highly contagious omicron subvariants that are spreading around the country, Americans are set to have one more COVID-19 vaccine from which to choose.

Earlier this week, officials from the Centers for Disease Control and Prevention (CDC) signed off on use of Novavax’s COVID-19 vaccine for those 18 years and older, making it the fourth COVID-19 vaccine now available to the American public.

“We now have four safe and effective COVID-19 vaccines available to protect Americans against serious illness, hospitalizations, and death,” President Joe Biden said in a statement on Tuesday. “…more people need to roll up their sleeves, particularly as we confront BA.5,” he added, referring to the highly contagious subvariant.

With a resurgence of COVID-19 infections and hospitalizations — including news Biden tested positive for the virus — there has been a renewed push to get people vaccinated against COVID-19, particularly those who have yet to receive their first shot, leaving many people vulnerable to severe disease and even death.

“If you have been waiting for a COVID-19 vaccine built on a different technology than those previously available, now is the time to join the millions of Americans who have been vaccinated,” CDC Director Dr. Rochelle Walensky said in a statement on Tuesday, following the agency’s recommendation of Novavax’s vaccine. “With COVID-19 cases on the rise again across parts of the country, vaccination is critical to help protect against the complications of severe COVID-19 disease.”

Nationally, there are still more than 26.3 million American adults who remain completely unvaccinated.

A number of health experts have expressed their hope that some of the individuals, who are still hesitant, may be more inclined to get the Novavax vaccine because it is based on a more traditional protein-based technology, one already used for the flu vaccine and other shots, while Pfizer and Moderna vaccine platforms tapped a new genetic technology — with messenger RNA — to produce their vaccines.

Since December of 2020, more than 205 million Americans have now received a mRNA COVID-19 vaccine, according to federal data, which health experts stress have also proven to be safe and effective and protecting Americans against severe forms of COVID-19.

“I think it’s an important advance. It’s actually giving proteins as vaccines as ‘tried and true’ in the sense that hepatitis and a variety of vaccines use that similar technology,” Novavax President and CEO Stanley Erck told ABC News last week, following the Food and Drug Administration’s authorization of the vaccine.

Dr. Shira Doron, an infectious disease physician and hospital epidemiologist at Tufts Medical Center in Boston said that although initial indicators suggest there may be low demand for the shots, even a sole person getting the Novavax vaccine could protect someone from severe outcomes of COVID-19.

“Every single person vaccinated is a potential life saved. In my mind there is no downside, only upside,” Doron said.

Data presented to CDC advisers this week showed that the vaccine was 90% effective against overall mild, moderate, and severe disease, and 100% effective against severe disease alone. However, the data was collected at the time when the Alpha variant was dominant, thus prior to the emergence of the omicron variant, which has been shown to chip away at vaccine efficacy. But the company announced on Tuesday that it had signed agreements with its partner, SK bioscience, for the creation of the company’s vaccine that would be designed to target the omicron variant.

Some prior concerns were raised by the CDC and FDA advisers, as preliminary data, reported by the company during presentations, indicated that some cases of myocarditis, a form of heart inflammation that can occur following vaccination, had been discovered after some trial participants received the Novavax series.

The rare cases of myocarditis have also been found to occur in people, most commonly in young men, who receive the other authorized COVID-19 vaccines, such as the Moderna and Pfizer. However, the occurrences have not been deemed serious enough to stop use of the vaccines in adults.

Ultimately, both groups of advisers unanimously voted to recommend the Novavax vaccine for use.

Although many lauded the positive data presented by Novavax, some other experts said they are still skeptical that that the introduction of the new vaccine will truly make a difference in the overall fight against COVID-19.

“Despite impressive clinical trial results and a more traditional technology, it’s hard to imagine that Novavax will make much of a dent in vaccination coverage,” said John Brownstein, Ph.D. an epidemiologist at Boston Children’s Hospital and an ABC News contributor.

“While there is some hope that those who have waited this long may change their minds, widespread infection among the unvaccinated and hope for a more well-matched vaccine may continue to prolong those holding out,” he added.

There has not been a significant bump in the number of people receiving a first COVID-19 dose since November 2021. Since then, the average number has steadily fallen to around 50,000 first shots, administered among all age groups, each day.

Earlier this month, the U.S. Department of Health and Human Services (HHS) announced that the Biden administration had secured 3.2 million doses of Novavax’s COVID-19 vaccine, which will be made available for free to U.S. states and jurisdictions.

Ordering is tentatively expected to open the week of July 25, though it is still unclear when the first deliveries will arrive, and Novavax said on Tuesday that it expects to ship doses to the U.S. Government-designated distribution center in the coming days.

“This vaccine is likely to fill in the gap left as the Johnson & Johnson vaccine is sunsetted,” Brownstein explained

In May, the FDA announced that it now limiting authorized use of the Johnson & Johnson vaccine after conducting an updated investigation into reports of rare blood clots. Use is limited to people ages 18 and older for whom other authorized or approved COVID-19 vaccines are not “accessible or clinically appropriate,” and to adults who choose to receive the vaccine or else they would not get vaccinated, the FDA wrote at the time.