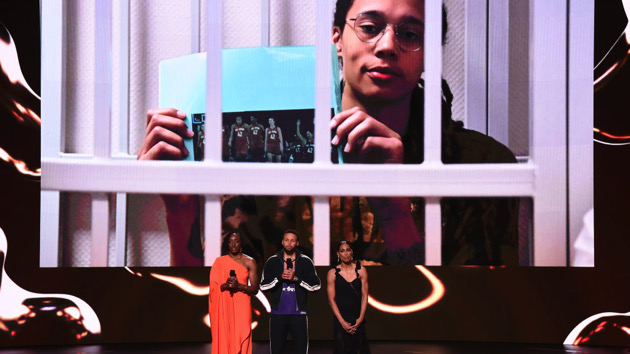 “I see down here so many special people,” Curry said in his opening monologue. “So many champions, so many potential Dancing With The Stars contestants.”

One notable absence in the Dolby Theatre was WBNA’s Brittney Griner, who has been detained in Russia since February for drug charges.

“But as we hope for the best, we urge the entire global sports community to continue to stay energized on her behalf,” Curry said. “She’s one of us, the team of athletes in this room tonight and all over the world. A team that has nothing to do with politics or global conflict.”

While accepting the Best Play award for her performance on the United States women’s national soccer team, Megan Rapinoe also used the space to speak about Griner’s detainment.

“The most striking thing is that BG’s not here,” Rapinoe said. “BG deserves to be free. She’s being held as a political prisoner, obviously.”

“We refuse to be happy with the minimum, because more than it has been does not mean it’s where it should be,” snowboarder and two-time Olympic gold medalist Chloe Kim said.

“We still fight for safety, to be believed and we still fight to have control over our own bodies,” Olympic gymnast Aly Raisman added.

“Just remember perseverance, plus passion, plus pride equals winning in the game of life,” he said.