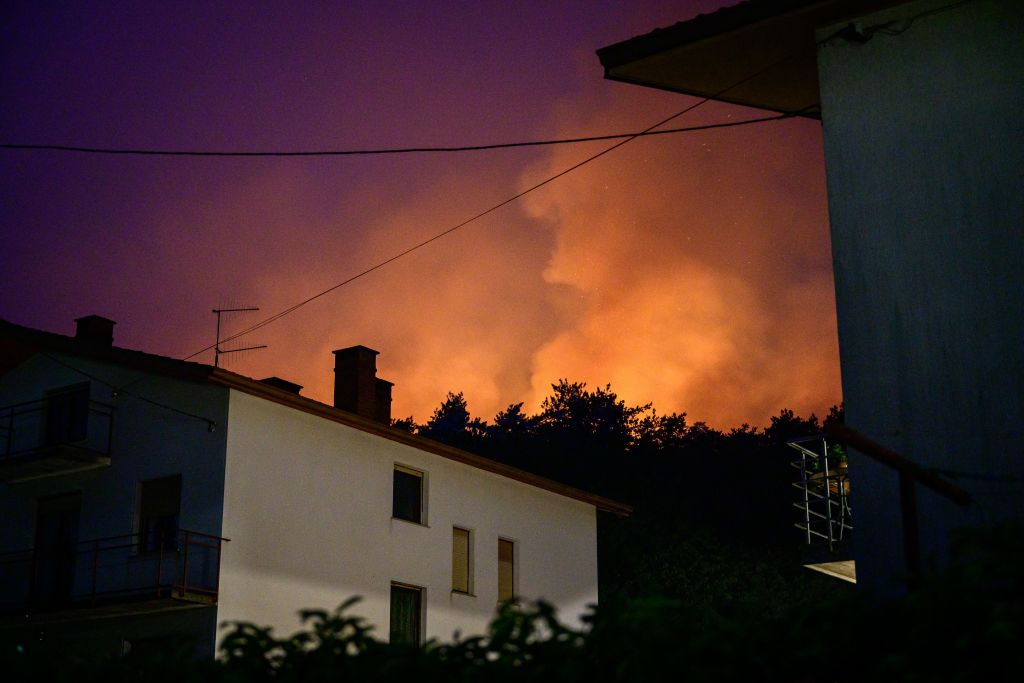 (LONDON) — Wildfires continue to rage across Europe, as an unprecedented heat wave and drought conditions threaten efforts to combat flames in some regions.

Most of the outbreaks were controlled early on, though firefighters are battling two larger fires near Athens, the Fire Service of Greece said in a statement.

One — in Penteli, a northern suburb of Athens — has so far burned 20,350 acres, local media reported.

Nearly 100,000 residents were told Tuesday to evacuate from the areas in and around Penteli, Greek Prime Minister Kyriakos Mitsotakis said Wednesday. That included a hospital.

The second large wildfire started in Megara, a small city west of Athens. Nearly 100 firefighters have been deployed to the site, along with dozens of firefighting trucks, aircraft and helicopters, fire officials said Wednesday.

Authorities have not yet determined what sparked the fires.

With temperatures in Athens expected to reach a high of 94 degrees Fahrenheit on Thursday, the national fire service issued an alert for heightened risk of dangerous fires for the state of Attiki, in Athens; several states in the Peloponnese region; the island of Evia, the site of devastating wildfires last year; and the islands of Chios, Samos and Ikaria.

Portugal, Spain and Italy have also been battling multiple wildfires amid elevated temperatures.

In Portugal, officials extended an alert on fire risk through Thursday as several fires burn throughout the country, including in the region of Murça, where high temperatures and strong winds have posed a challenge to combating the blaze.

One fire, in the northeastern region of Aragon, caused a railway company to suspend train service on its Madrid-Zaragoza line on Wednesday.

In Italy, where several wildfires have broken out throughout the country this week, a blaze near the Tuscan town of Lucca burned over 1,400 hectares and forced some 500 people to evacuate, officials said.

Record temperatures and winds are impacting firefighting efforts in France, where tens of thousands of people have been evacuated in recent days and some 2,000 firefighters are battling blazes in the southwestern Gironde region. Two firefighters were seriously injured Tuesday while battling the forest fires, officials said.

French President Emmanuel Macron visited the impacted region on Wednesday, where he toured the devastation and met with firefighters. Climate change, which scientists say will continue to make wildfires more frequent and destructive, will force France and the European Union to take “structural decisions,” he said, according to Reuters.

In the United Kingdom, London has been battling record blazes amid record hot weather.

Wednesday was the busiest day for the city’s fire service since World War II, authorities said, with firefighters responding to more than 1,146 incidents across London.

More than 40 houses and stores were destroyed “after a number of significant grass fires spread to nearby buildings,” the London Fire Brigade said. “Crews worked tirelessly to tackle fires which also engulfed garages, farm buildings, vehicles, outbuildings, a car wash and a church hall.”

“We can’t afford to have more of these days,” London Mayor Sadiq Khan said on Twitter Wednesday. “We need to adapt our cities and stop these horrific events from occurring by tackling the climate crisis.”