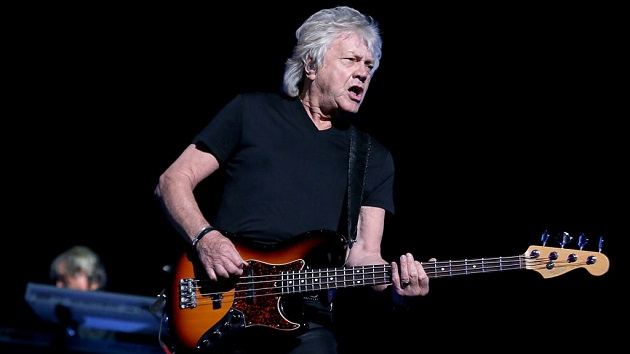 “We’ve been writing a couple of songs together … for the future,” Lodge tells ABC Audio, while also noting that Davison will appear with him and his 10,000 Light Years Band at a one-off concert this Monday, July 25, at Ocean City Music Pier in Ocean City, New Jersey.

The 77-year-old Rock & Roll Hall of Famer, who mounted a three-week U.S. tour in March, tells ABC Audio that he’d initially planned to play more concerts this summer, but decided to take a break before scheduling a new trek.

Lodge notes he couldn’t pass up doing the Ocean City show because he loved the idea of playing in that location.

“To go to a pier in New Jersey in the summer, it intrigued me,” he says. “The boardwalk and all that, you know?”

Lodge says it reminded him of England during the late 1950s and early ’60s, when rock ‘n’ roll shows were commonly held on Sundays at various piers during summertime.

Meanwhile, he says the New Jersey concert will basically feature the same set as the ones he played in March.

At those shows, he performed renditions of classic Moody Blues songs that he wrote and also paid tribute to his former bandmates Justin Hayward, Mike Pinder and the late Ray Thomas by playing tunes they composed for the group.

A major highlight was a rendition of the Hayward-penned “Nights in White Satin,” with Davison on guest vocals.

Tickets for the concert are available at Ticketmaster.com; special upgrades can be purchased at OneLiveMedia.com.