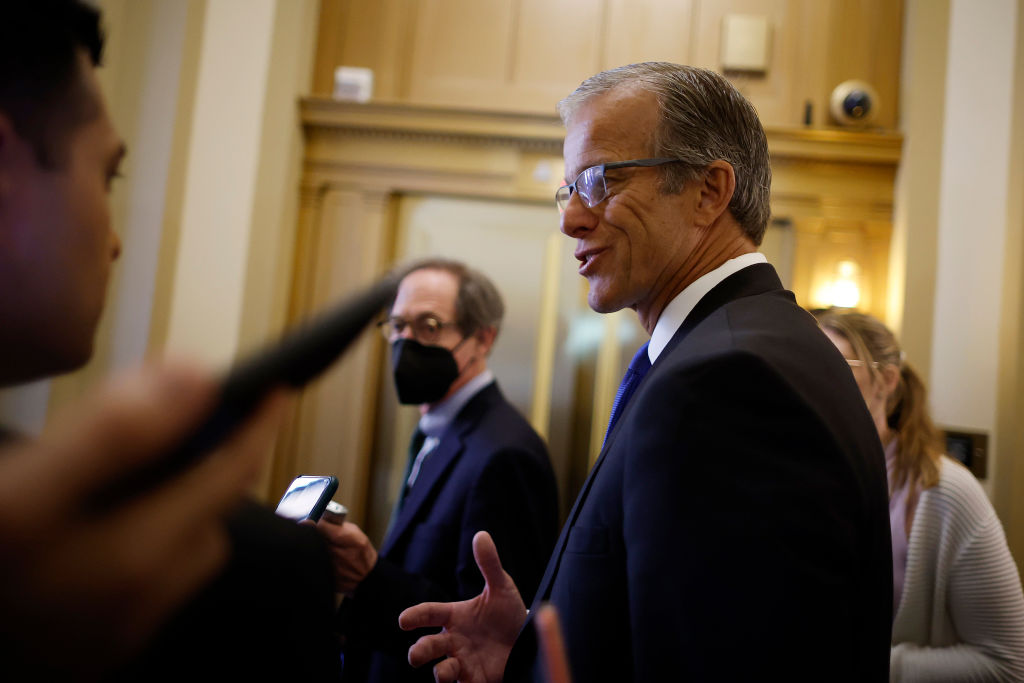 (WASHINGTON) — On Tuesday, House Democrats passed a bill which would protect same-sex and interracial marriages, in response to the Supreme Court decision to overturn Roe v. Wade and fear among lawmakers that other legal protections might be at risk.

Meanwhile, the Labor Department announced inflation has reached its highest rate in 40 years, a fact that is being blamed on the White House and Democratic lawmakers, with a recent ABC-Ipsos poll showing that more than 80% of Americans think the economy is either an important or very important issue affecting how they will vote in the midterm elections this November.

Senate Minority Whip John Thune spoke with GMA3 about the House vote on Tuesday, his perspective on what’s causing inflation and what he thinks is the biggest concern for voters.

GMA3: Let me bring in now Senate Minority Whip John Thune. Senator, thank you so much for being with us. I think a lot of people wouldn’t be surprised that a Republican is blaming Democrats maybe for inflation. We’re going to get to that in just a second. But I do want to ask you about the news we saw overnight, what happened in the House, the kind of a bipartisan bill came out of there to protect same-sex marriage. This, of course, in the wake of the Roe v. Wade decision with, some say, other things like same-sex marriage could be at risk. I want to ask, are you ready in the Senate to support that bill as well to somewhat codify same-sex marriage in this country?

THUNE: Well, thanks, TJ. Amy, good afternoon. We don’t know if that bill is coming to the Senate. They did pass a bill in the House last night. And if and when Senator Schumer decides to bring it up in the Senate, then we’ll consider it at that time. But as you saw, there was a fairly significant vote, bipartisan vote last night. And I wouldn’t be surprised if that were the case in the Senate. But I will go across that bridge if and when we come to it.

GMA3: But would you say we do in this country? Maybe that’s something we do need to codify? Do we need to make it clear — same-sex marriage — so it doesn’t end up in the Supreme Court’s decision again?

THUNE: Well, I don’t think it’s an issue. It’s not an issue. Anybody, certainly in my state of South Dakota, for that matter, across the country is talking about right now. They’re talking about inflation and gas prices and all the other things. I don’t — I think it’s an issue that right now, at least the Democrats here in Washington are talking about, because they’re trying to create an issue going into the election because they don’t want to talk about the economic issues. So, it’s not — it’s just not something the court is considering.

They made it very clear, actually, in their opinion on Dobbs that they were not dealing with anything but the precedent on abortion, that it wouldn’t affect other precedents. So, I think you had a very strong majority of people point out that Justice Thomas had a dissenting view. That’s true. But if you look at the six-person Justice majority on that opinion, they made it abundantly clear that this issue addressed specifically the issue of abortion and not other precedents.

GMA3: Senator Thune, let’s move on to the economy and inflation specifically. I’ll directly let everyone know your tweet that we know TJ was referring to. You said or you tweeted, “this level of inflation is a direct result of Dems spending since they’ve taken control in D.C.” Where do you believe costs should be and could be cut right now to rollback that tide of inflation?

THUNE: Well, I think if you look at it, Amy, when President Biden took office, the inflation rate was 1.4%, well within the Fed’s range of 2%. Now, as you said, it’s a 40-year high, 9.1% last month, year over year. What that represents, according to the Joint Economic Committee in a study they did recently, is about 700 additional dollars per month per family in this country, or about $9,000 a year in higher costs.

So, I think it comes back to the bill they passed, which we tried to discourage them from passing. And even liberal Democrat economists from the Obama administration also suggested this was a really bad idea to flood the zone with a lot of spending, which they did with the $2 trillion bill last year. That overstimulated the economy. You know, the textbook definition of inflation is too many dollars chasing too few goods. So, it started with the spending.

I think the other issue, honestly, is lack of a coherent energy policy in this country. A lot of what drives inflation is gas prices. And if you look at the price of gas, it’s doubled since the president took office. And I think a lot of that has to do, which is not having the supply. They shut down a lot of oil and gas production in this country. I think there are things you can do that, you know, one, stop the wasteful spending, unnecessary spending.

Don’t talk about raising taxes. That would be a horrible idea right now, which is on their agenda and then come up with a coherent energy policy that emphasizes American energy production so that we’re not dependent upon other countries around the world.

GMA3: What would you like to do right now given that — and again, you listed many things, and I again, somewhat said it jokingly, nobody surprised to hear a Republican put the blame at the feet of Democrats. But we had the pandemic and there were a lot of things that did happen that was kind of out of a lot of people’s control with the supply-chain issues. A lot of people came right back to the market. The demand went up really quickly. And I know you talked about the 2 trillion in spending, but a lot of that was to put money back in Americans’ pockets who were struggling coming out of the pandemic. So it was a lot of things going on there. But what can you do? What can Congress do right now — do you feel?

THUNE: Well, and honestly, TJ, to your point, there was $5 trillion in spending in 2020, all done on a bipartisan basis. The $2 trillion came last year after the president took office. And there are things we can do. I worked on a bipartisan way with Amy Klobuchar from Minnesota on a supply chain issue, the Ocean Shipping Reform Act, which is designed to get at some of those bottlenecks that we’re experiencing at the ports.

And I think, again, as I said before, focusing on and getting the administration to work with us on an energy policy that is American energy, all, you know, it should be all of the above strategy. But we ought to try to achieve energy independence in this country. I think that will drive gas prices down, which I think would have a pretty profound impact on inflation. And I just think, again, it would be a mistake right now, which the Dems are talking about, to increase taxes and come up with yet another pretty big spending bill.

They’re talking about another trillion dollars. I think that would be a huge mistake. But it shouldn’t come as any surprise to you or anybody else. It’s an even numbered year. This is an election year. So obviously we’re going to be talking about issues that we think impact people’s pocketbooks in this country. And certainly inflation represents that.

I just came from a weekend back in South Dakota, out in the western part of the state, and it is having a profound impact on the economy in a state like South Dakota, which in the summer months depends on the travel industry and that, you know, gas prices has a very consequential impact on that.

GMA3: Senator Thune, it is an election year, as you point out. And according to the latest Pew Research poll, 62% of Americans believe that abortion should be legal in all, or at least most cases. Obviously, we saw the sweeping reversal of Roe versus Wade. I’m curious, how do you see women losing their reproductive rights that they’ve had for nearly five decades? How do you see that impacting Republicans? I know you’re up for reelection as well in these midterms.

THUNE: Right. Well, and I think it’s an issue that it will in certain areas of the country, act probably as a motivator for people to vote. I think in the end, Amy, it does get trumped by these other economic issues. It’s an issue that people care — certainly intensity behind it on both sides, which is the reason, I think for the past 50 years, there’s been so much tumult in the country and why the court decided to take it up.

But, you know, again, remember, it doesn’t do away with abortion. It simply returns that power to the states and their elected representatives. And it’s, I think, one of those issues you have to find political consensus around. And I think each state, at least right now, will probably do that slightly differently in how it plays out in the election. I don’t think it’s anybody’s guess. I think it’s an issue and I think in certain places it will be more prominent than it is in other places.

But I think in most areas of the country, people are going to be focusing on these pocketbook economic issues. I think that’s ultimately going to be what they vote on.