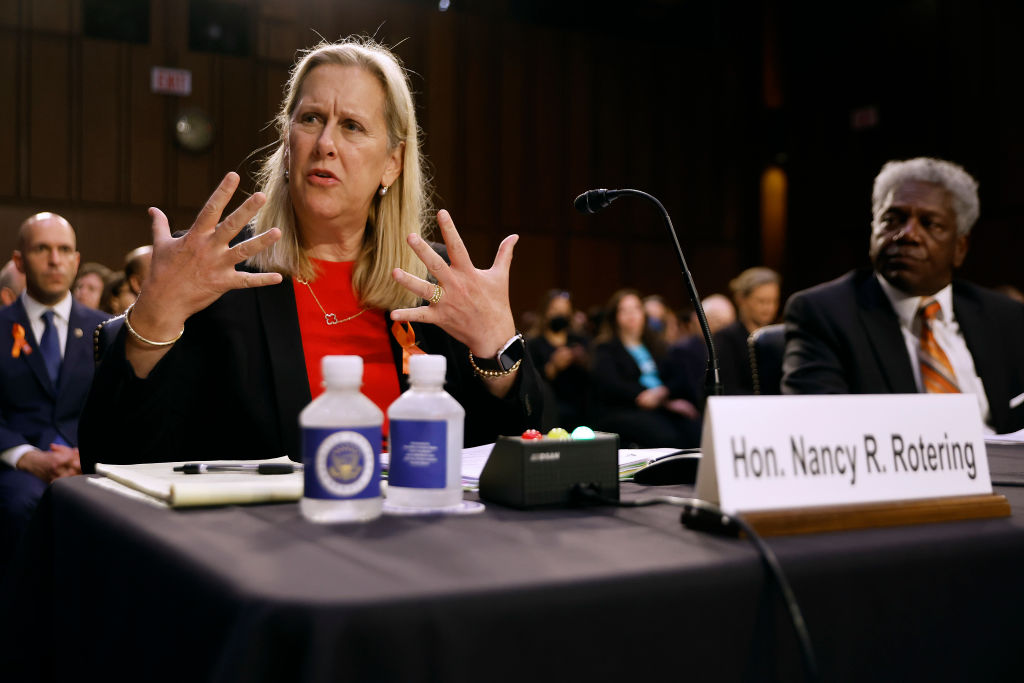 (CHICAGO) — Just 16 days after a man wielding an AR-15-style rifle allegedly killed seven people and injured more than 40 at a Fourth of July parade in the Chicago suburb of Highland Park, the town’s mayor pleaded with Congress to pass a federal assault weapons ban, saying, “today is the day to start saving lives.”

But Mayor Nancy Rotering quickly learned during her testimony Wednesday before the Senate Judiciary Committee that enacting such a law will be a major challenge. Republican committee members — including two from Texas, where on May 24 a gunman firing an AR-15-style rifle killed 19 students and two teachers — argued that such a ban will not stop massacres and only infringe on the Second Amendment rights of law abiding citizens.

Rotering testified about being in the middle of the Independence Day shooting rampage. She graphically detailed the chaos, panic and bloodied bodies lying on the street of “an All-American Midwestern town,” telling the committee, “I will be haunted forever.”

“Less than a minute is all it took for a person with an assault weapon to shoot 83 rounds into a crowd, forever changing so many lives,” Rotering told the panel. “And the most disturbing part, this is the norm in our country.”

She began her statement by describing a “perfect summer day” with 3,000 people lining the parade route, waving American flags and cheering the marching bands and colorful floats of her city’s first post-pandemic Fourth of July Parade in two years.

“Music and cheering were all we could hear as we headed down the street,” Rotering testified. “I looked left and waved to my husband in the crowd. What I didn’t know at that moment was that just to my right on a one-story rooftop, a 21-year-old was preparing to traumatize my hometown forever with an assault weapon.”

She said that as she and her city council colleagues headed down the parade route, she noticed that a marching band had gone silent and she heard a “tat, tat, tat” sound she initially mistook for a drum cadence.

“I then saw a sea of marching band members sprinting down the sidewalk, some with tubas entwined around their bodies,” Rotering told the committee. “I realized later that the sound I heard wasn’t drum cadence. It was the sound of an assault weapon.”

She said she and her colleagues immediately started an emergency evacuation, screaming at paradegoers to run, repeatedly shouting, “shooter.”

“Adults stared back, not comprehending,” she said. “But the kids knew immediately this wasn’t a drill and they yelled to everybody, ‘run, hide.’ They knew what was happening.”

She said among those killed were Kevin and Irina McCarthy, who were at the parade with their 2-year-old son, Aiden. She said good Samaritans found the boy under his father’s body.

Rotering also told the horrific story of 22-year-old Cassie Goldstein, who she says was forced to leave her mortally wounded mother, Katherine, behind as bullets rained down on the crowd.

“When the shooting stopped, Cassie returned to find her mother lifeless,” said Rotering, as a group of Highland Park residents attending the hearing sat behind her.

She told the committee of hot shrapnel melting into the arms and legs of the victims.

She noted that in 2013 following the mass shooting at Sandy Hook Middle School in Newtown, Connecticut, Highland Park passed a ban on assault weapons and large capacity magazines, but lamented that local laws have little effect as long as such weapons are still being legally sold in neighboring Illinois towns.

“Local government cannot do this alone,” Rotering said. “Congress must take action. You must federally ban assault weapons and large capacity magazines. Today is the day to save lives.”

But Rotering’s plea was met with stiff resistance from Republican members of the committee, who uniformly agreed that renewing the federal assault weapons ban that was enacted in 1994 and expired in 2004, is not the answer to curbing mass shootings.

“These bans would be ineffective and not consistent with the right to self-defense,” said Sen. Charles Grassley, R-Iowa. “We also know restrictive gun control will hurt vulnerable communities that need to defend themselves against the horrible spike in violence.”

Republican Sens. Ted Cruz and John Cornyn, both of Texas, agreed with Grassley, saying they support tougher laws that go after the perpetrators of the violence instead of the guns, which Cornyn described as “inanimate objects.”

Cruz cited a shooting that occurred Sunday at a shopping mall in Greenwood, Indiana, in which three people were killed before an armed good Samaritan shot and killed the suspect who was firing an AR-15-style weapon.

In June, Congress a passed a bipartisan gun safety law, the first major piece of federal gun reform in almost 30 years, that was signed into law by President Joe Biden. The legislation — which followed back-to-back mass shootings in Uvalde, Texas, and Buffalo, New York — expands federal background checks for buyers under the age of 21, provides financial incentives for states to pass “red flag” laws and other intervention programs and closes the so-called “boyfriend loophole” denying people convicted of domestic violence access to firearms.

But Sen. Tammy Duckworth, D-Illinois, a retired military veteran, testified before the committee that banning AR-15-style rifles needs to be made a priority for Congress. She called the rifles “weapons of war” designed to kill and critically maim people far more efficiently than conventional semi-automatic firearms.

“The leading cause of death of Americans under the age of 16 in this country isn’t cancer, isn’t car accidents, it’s gun violence. Only in America,” Duckworth said. “I’m urging this committee to demonstrate courage in supporting a ban on assault weapons and large capacity magazines.”

Sen. Dick Durbin, chairman of the Senate Judiciary Committee, ended the hearing by acknowledging the divisiveness of the debate over gun control.

“You saw a good illustration today of the political aspects of this issue involving guns, why we do so little,” Durbin, a Democrat from Illinois, said. “Once every 30 years, we’re going to do a gun safety bill? God forbid if that is what happens.”