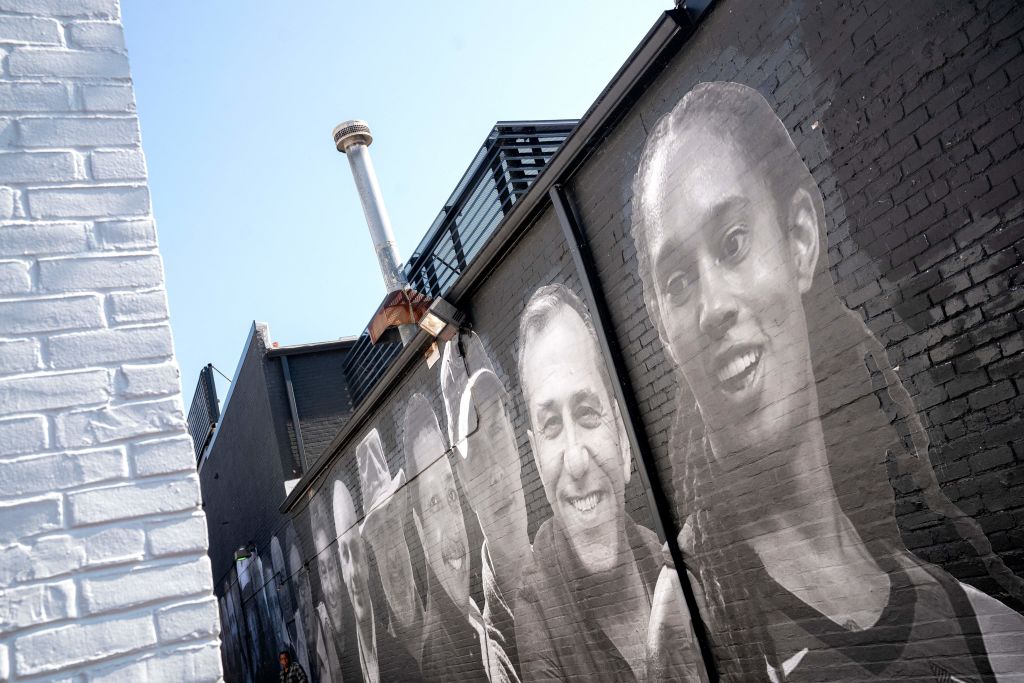 (WASHINGTON) — Families of several Americans who are detained abroad arrived in Washington on Wednesday morning to unveil a mural depicting them in an effort, their relatives say, to increase public awareness and pressure the Biden administration to do more to bring them home.

The mural features 18 Americans held in other countries. There are currently 64 known citizens being detained outside the U.S., according to the James W. Foley Legacy Foundation.

The mural includes WNBA superstar Brittney Griner and former Marine Paul Whelan, who have become faces of the issue because of their ongoing detentions in Russia. (Griner was arrested and later pleaded guilty to illegally bringing hashish oil into the country, though she said it was “inadvertent” and was part of her vape cartridge. Whelan was charged with espionage, which he and the U.S. government deny.)

The 15-foot-tall installation aims to bring attention to Griner, Whelan and to a series of under-recognized Americans being held around the world, sometimes for political leverage.

Many of the images used for the mural are of the last pictures taken of the detainees.

While Matthew Heath’s portrait depicts him with a soft smile in his crisp Marine uniform from when he served, his mother, Connie Haynes, said he is currently being tortured in Venezuela after more than two years in detention.

She claims Heath has been repeatedly beaten and left with both hands broken and his retina detached and has at random intervals been fed carbon monoxide while locked in a 2 square-foot box.

Heath tried to kill himself this year but was still being abused and chained to his bed in the medical facility where he was being watched, according to his mom.

“My son is not going to survive if our government does not get him home,” she said Wednesday. “I don’t know how much more he can endure.”

During the unveiling, Haynes was interrupted with a call and rushed to end of the alley next to the mural. Her son was trying to reach her.

“We were able to tell him what we’re doing, for him, for the other families — how hard we’re working to try to get him home,” Heath’s uncle, Everrett Rutherford, said afterward.

They were also able to connect Heath with the Biden administration’s special presidential envoy for hostage affairs, Roger Carstens, who spoke Wednesday.

During the rare opportunity to talk with Heath, Rutherford said he and Heath’s mom were able to “give [Heath] a bit of courage and hope.”

State Department spokesman Ned Price on Wednesday called the mural “a powerful symbol of those who have been deprived and taken from their loved ones” and said Carstens’ presence at the unveiling was an important way “to continue to show our support for these families who are enduring an ordeal that to anyone but them is unimaginable.”

“These efforts are — by necessity — quiet,” Price said when asked about the frustration of some of the detainees’ families about the future. “We have found that these cases often are best worked behind the scenes. Even though we don’t speak of it, it doesn’t mean that we aren’t working around the clock to see the successful resolution and outcome.”

The mural’s artist says it was designed to be impermanent.

​​The Americans’ faces, plastered using flour, water, sugar and paper, will “fade, tear and eventually disappear over time,” Isaac Campbell explained in a press release. That fleeting quality is meant to add a sense of urgency for the government to “use the tools available to bring these Americans home — before their faces fade away and disappear from this wall,” Campbell wrote.

“This doesn’t go away,” said Neda Sharghi, the only sister of Emad Shargi, a dual citizen who has been detained in Iran since 2018 on claims he is a spy.

The siblings’ father, who “felt like there was hope to bring his son home” while watching the unveiling, fainted and was taken away in an ambulance out of the event, Neda Shargi said. “This is our world,” she added.

“Any second my father could pass and not see his son anymore,” she said. “But I don’t want to cry,” she continued, calling on anyone struck by the new mural to call their representatives to “let President [Joe] Biden know that you will all stand with him if he can bring Americans home.”

Wednesday’s ceremony comes one day after Biden signed an executive order that declared hostage-taking and the wrongful detention of U.S. citizens a national emergency.

The order is meant to leverage more financial sanctions against those who are directly or indirectly involved in such detentions. Additionally, the State Department added new warnings on its travel advisories to help citizens avoid locations overseas where they risk wrongful arrest.

The White House informed relatives of American detainees of the executive order before its signing in a Monday call that was characterized as a “one-way conversation” by Jonathan Franks, a spokesman for a network of families and the Bring Our Families Home Campaign. He claimed the White House’s latest actions were “an effort to pre-manage the press attention” around relatives of those detained arriving in Washington this week.

While some families have commended the move to improve transparency and intelligence-sharing between the federal government and concerned relatives of those held overseas, others have expressed vexation with their lack of communication with the president.

“We are definitely grateful,” Hannah Shargi, the daughter of Emad Shargi, told ABC News of Biden’s recent actions. But she said she wants to see, at minimum, meetings between families and Biden organized by the country where their relative is detained.

“We know that they’re suffering. We know they’re scared. And we know they’re anxious,” White House spokesman John Kirby said at a briefing on Tuesday. “We know they want their loved ones back home, and the president wants that, too.”

Meanwhile, they work and they wait.