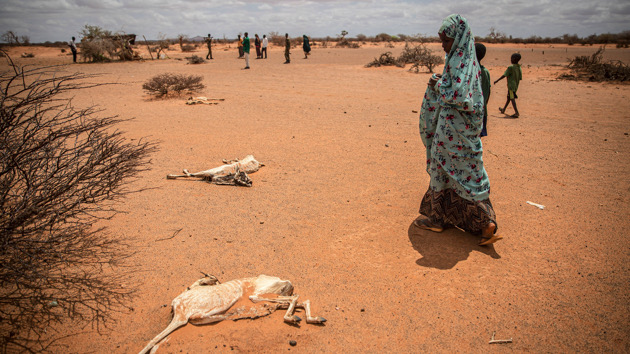 (LONDON) — The International Rescue Committee for the first time on Tuesday issued a “Crisis Alert” update to its annual “Emergency Watchlist” report, warning that millions of people across East Africa could die from “catastrophic famine” without “urgent” international funding and action.

The global humanitarian aid organization releases its “Emergency Watchlist” at the end of each year, identifying the countries it believes are most at risk of the worst humanitarian crises over the course of the coming year. But since early 2022, Russia has been waging a war against Ukraine that has disproportionally affected food security in Ethiopia, Kenya and Somalia, which were reliant on Russia and Ukraine for about 90% of their wheat imports and are now in the midst of their longest, most severe drought in decades.

The IRC said its first-ever “Crisis Alert” update was issued in light of this fallout from the war in Ukraine, which — combined with the increasingly detrimental impact of climate change, conflict and COVID-19 — has driven those three East African nations into a “predictable crisis dangerously neglected by the international community.”

“There is nothing natural about famines in the 21st century. While a complex set of factors are driving extreme hunger, the slide into famine and mass death is man-made, driven by international inaction,” IRC CEO David Miliband said in a statement Tuesday. “This crisis was predictable and preventable. It has been unfolding over two years of repeated warnings and worsening hunger. What we are witnessing is an unnatural disaster of catastrophic proportions.”

The war in Ukraine would not have had such a significant impact on East Africa if drought had not already devastated agriculture, IRC said.

After a record four consecutive failed rainy seasons, the number of people going hungry across Ethiopia, Kenya and Somalia is set to surpass 20 million by September — nearly a doubling compared to late 2021. Over three million of them are already experiencing the most extreme levels of hunger, increasing their risk of death, according to the IRC.

The IRC’s “Crisis Alert” update noted “specific concern” for Somalia, which it said is the worst affected and is entering a famine that is expected to be even more severe than the 2011 one that killed an estimated 260,000 people. In one IRC’s nutrition clinic in Mogadishu, from April to May, the organization has seen a 265% increase in admissions for children under the age of 5 suffering from severe malnutrition. IRC teams on the ground report that people are already dying from starvation.

“There is no time to wait for data collection to confirm what the IRC is already seeing on the ground: a country hurtling towards a catastrophic famine,” the organization said in the update. “A famine declaration will tell us when it is too late — that people are already dying en masse, not how many lives we can still save. Waiting to respond based on retrospective data will condemn hundreds of thousands to an unnecessary death. Instead the international community needs to look forward, applying a no-regrets approach.”

The warning came a day after the U.S. Agency for International Development announced nearly $1.3 billion in additional humanitarian and developmental assistance to the Horn of Africa region. The IRC said the humanitarian-response plan for the region would be funded at only 40%, even accounting for the new funding.

“Severe underfunding of humanitarian responses is depriving millions of the assistance they need to survive,” said Miliband, the IRC’s CEO. “The new U.S. funding announced this week must be a first step, not a last one.”