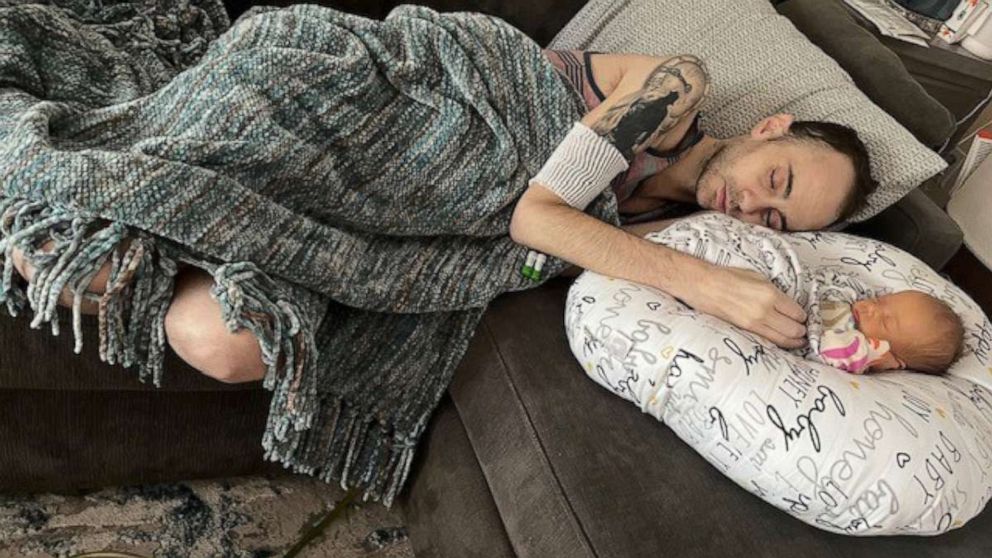 (NEW YORK) — A New York man is determined not to give up when it comes to fighting the rare disease he’s been living with the last two years.

Anthony Di Laura first noticed something was unusual back in the summer of 2020.

“I was having stomach pain. I thought it was a stomachache. And I realized my belly button was protruding a little bit. No other symptoms,” Di Laura told “Good Morning America.” “It came, it went away after a week. But when it came back, my wife said, ‘Let’s go to the doctor. Let’s go to the gastroenterologist.'”

After visiting a gastroenterologist, Di Laura was referred to Memorial Sloan Kettering Cancer Center in New York, where he received a diagnosis in August 2020 of pseudomyxoma peritonei (PMP), a rare disease where mucus-secreting tumors grow in the abdominal area, according to the National Organization for Rare Disorders.

Since his diagnosis, Di Laura and his family have been on a roller coaster of highs and lows.

The 35-year-old and his wife Jackie Cucullo welcomed their first child, a son named JP, on New Year’s Day in 2021 and daughter Lila Rae just last month — two big life events for the couple, who call their children “miracle babies.”

Di Laura had to endure chemotherapy for seven months and elected to undergo cytoreductive surgery with HIPEC — a major surgery with a type of heated chemotherapy — also nicknamed the “mother of all surgeries” or MOAS, three times with different doctors and medical teams, all in an effort to get better.

“It is the most miserable feeling in the world that nobody should ever go through,” Di Laura said of his day-to-day life. “Every day is a battle. Every day is a challenge.”

The chemo and surgeries didn’t yield the results Di Laura was hoping for and doctors began telling him that he was inoperable.

“This gets me every time. I hate talking about it. My last hospital stay … the shift doctor who was in charge came into our room and said, ‘What is your plan?’ I looked at him, I said, ‘What’s my plan? I want to get better.’ He goes, ‘Nobody will operate on you in this hospital … Your best bet is to go on hospice and live a comfortable life until the end.’ That’s what he said,” Di Laura recalled.

Throughout the journey, Di Laura, Cucullo and their family refused to give up hope. In March, the couple received promising news from someone through their PMP Pals support group.

“One of the women heard about another young man whose story was so ironically similar to Anthony’s,” Cucullo said. “They’re even close in age as well. [The woman] immediately called us and she said, ‘I dropped to my knees when I heard his story.'”

According to that support group contact, the other man was “the first person in this country to have a multi-visceral organ transplant” at the Cleveland Clinic in Ohio, with Dr. Anil Vaidya.

“[Vaidya] is from the U.K. [and] came here to essentially help people like my husband and various other people for other organ transplants,” Cucullo said. “On March 3, I made my first phone call to [the Cleveland Clinic] and that was when the process started for Anthony to be listed as an organ transplant recipient.”

Di Laura and Cucullo have since met the man, Andy Voge, and sought out his doctor, [Vaidya]. After multiple denials and appeals to their insurance company, Di Laura was finally approved to get on the transplant list last week, the first step to getting a modified multi-visceral transplant.

“Together with Mr. Di Laura’s medical team, our clinical team made the decision to cover Mr. Di Laura’s procedure with the surgeon at the Cleveland Clinic,” the company said in a statement to “GMA.” “The transplant surgeon provided additional information to demonstrate this procedure has shown early promise in case reports from the U.K. and could be the only option left that may improve health outcomes for Mr. Di Laura. We will continue to support him and his family as we move forward.”

Cucullo told “GMA” that, as of Monday, her husband had been officially added to the organ transplant list.

“The surgery needs to happen and the entire team [at the Cleveland Clinic] is very confident in Anthony’s success […],” Cucullo said. “Anthony and Andy alike can spread the word and they can be the torch holders to say, ‘This is a new way. We can beat this disease.’ As tough of a surgery it might be and a long recovery, this gives hope to thousands of people.”

No matter what happens, Di Laura said he hopes to impart one message to his children, above all others.

“Always fight. Always keep hope and never give up because somebody says it’s impossible,” he said.

“I’ve never taken no for an answer and I’m not going to start now when it’s going to save my life to live with my family,” he added. “So I want my kids to know that never give up in the face of anything because somebody says no. There will always be a way around it. There are always new ideas or always new inventions. There always will be an answer. You just can’t give up and that goes for everything in life.”