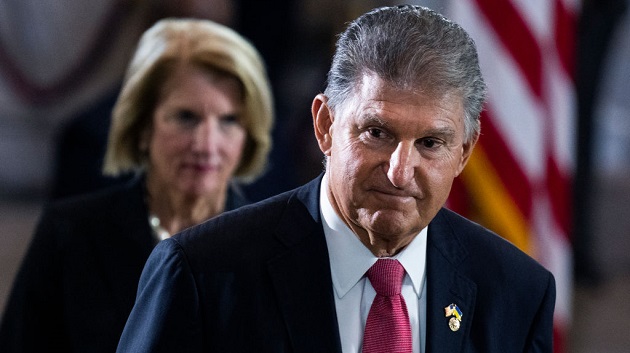 (WASHINGTON) — With Joe Manchin’s stamp of approval in the closely divided Senate, President Joe Biden and Democratic Party leaders are ready for the chamber to move forward before the next recess on a slimmed-down spending bill that focuses on health care. But not all Senate Democrats feel the same.

One day after Sen. Bernie Sanders, I-Vt., castigated West Virginia’s Sen. Manchin for rejecting the Democratic package on climate and taxes — saying he was sabotaging “future generations” — Senate Finance Committee Chair Ron Wyden said he wants to keep a path open for adding climate policies into the upcoming reconciliation package, including those put on ice by Manchin.

“Conversations on clean energy must continue to preserve our options to move forward,” Wyden, of Oregon, said in a statement on Monday. “While I strongly support additional executive action by President Biden, we know a flood of Republican lawsuits will follow. Legislation continues to be the best option here. The climate crisis is the issue of our time and we should keep our options open.”

Wyden stopped short of threatening to revoke support for a health care-only bill and no other Senate Democrat appears to have drawn such a red line. But progress requires consensus in the 50-50 chamber, given GOP opposition: Democrats intend to pass their reconciliation bill using a fast-track budget tool that needs only a simple majority.

Manchin has agreed to allow Medicare to negotiate prescription drug prices, potentially saving the federal government $288 billion and bringing down costs for seniors, in addition to a two-year extension of pandemic-era premium subsidies for lower-income Americans enrolled in the Affordable Care Act.

But, citing concerns about historically high inflation, Manchin last week pumped the breaks on climate proposals in the Democratic legislation. He said then that he needed to see July’s inflation data before he could determine how to proceed on the climate component.

As for Sanders’ criticism that he was “intentionally sabotaging the president’s agenda,” Manchin was asked Monday to respond and said: “I’ve been at this a long time. People say things some times they might not mean, and I don’t take it personally.”

Democratic Whip Dick Durbin, of Illinois, said Monday that he can “live with” moving forward on a bill focused only on health care if that’s the best that Majority Leader Chuck Schumer, of New York, can achieve in discussions with Manchin.

“My major frustration is I think Joe should have made his position clear a hell of a long time ago,” Durbin said, echoing Sanders’ criticism Sunday that “the problem was that we continue to talk to Manchin like he was serious. He was not.”

“If they do prescription drugs, give them credit, that’s a good issue,” Durbin said Monday. “But we’ve spent a lot of time wasted in negotiation.”

Other Democrats also signaled Monday that they’re prepared to swallow a package that excludes climate and spending.

“We have a 50-50 Senate. It is what it is,” Sen. Mazie Hirono of Hawaii said. “Any improvement to me is something to be considered.”

“Washington Democrats are working right now to find a way to put more bureaucracy between American patients and the treatments they rely on. They want to put socialist price controls between American innovators and new cures for debilitating diseases,”  McConnell said Monday. “With one-party Democratic control of government they just might get away with it, but our colleagues need to think again.”

Manchin: ‘I haven’t walked away’

Manchin, in conversation with reporters on Monday, insisted he was continuing to negotiate on climate and other provisions. He was firm on waiting for the July inflation numbers before proceeding.

“I haven’t walked away from anything, and inflation is my greatest concern,” he said. “I don’t know what tomorrow brings.”

But Democrats are running out of time and know that after the monthlong August recess they must return with a focus on funding the government by Oct. 1, nearly always a fraught process. November’s midterm elections come soon after that.

And with both health care premiums in many states set in August and pandemic-era ACA subsidies set to expire by year’s end, Democrats could be facing angry voters if costs skyrocket — amid the pain of inflation — ahead of the midterms where control of Congress is at stake.

“After decades of fierce opposition from powerful special interests, Democrats have come together, beaten back the pharmaceutical industry and are prepared to give Medicare the power to negotiate lower drug prices and to prevent an increase in health insurance premiums for millions of families with coverage under the Affordable Care Act,” the president said. “Families all over the nation will sleep easier if Congress takes this action.”