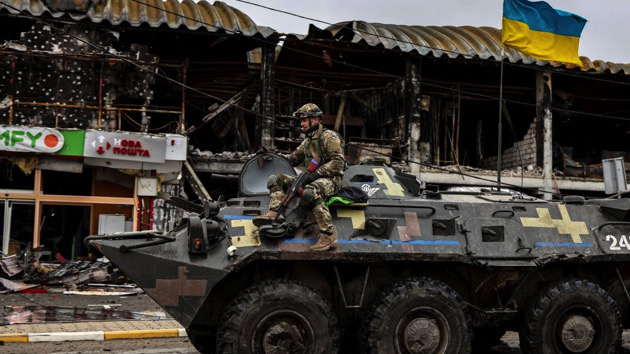 (NEW YORK) — Russian forces are continuing their attempted push through Ukraine from multiple directions, while Ukrainians, led by President Volodymyr Zelenskyy, are putting up “stiff resistance,” according to U.S. officials.

The attack began Feb. 24, when Russian President Vladimir Putin announced a “special military operation.” Heavy shelling and missile attacks, many on civilian buildings, continue in Ukraine’s capital, Kyiv, as well as other major cities like Kharkiv and Mariupol.

Apr 04, 7:41 am
Kremlin reacts to images of dead bodies in Bucha

Russia responded on Monday to accusations that its troops have deliberately killed civilians in Ukraine, after images emerged showing bodies in civilian clothes scattered in areas on the outskirts of the capital that were recently recaptured from Russian forces.

During a daily press briefing on Monday, Kremlin spokesman Dmitry Peskov said Russia “categorically dismiss[es] any accusations” of its role in civilian killings and that Moscow does not trust the evidence in Bucha.

“This information should be seriously doubted,” Peskov told reporters. “From what we have seen, the video materials cannot be trusted to a large extent, as our specialists from the Defense Ministry have detected signs of video forgery and other kinds of fakes.”

The Kremlin demands that “international leaders do not jump to conclusions, do not make hasty unsupported accusations but at least seek information from various sources and at least listen to our arguments,” Peskov said.

“The facts, the chronology of events also do not speak in favor of the credibility of these claims,” he added.

Russia will reiterate its calls to discuss the matter at the United Nations Security Council on Monday, according to Peskov.

“The initiative aimed to put the item on the Security Council agenda demonstrates that Russia wants and actually demands its discussion at the international level,” he added.

Russia said it will repeat its request for the United Nations Security Council to meet on Monday over what Moscow described as “criminal provocations by Ukrainian soldiers and radicals” in the Ukrainian city of Bucha.

The United Kingdom’s mission to the U.N., which assumed the presidency of the 15-member Security Council for April, has said the group will hold a scheduled discussion on Ukraine on Tuesday, rather than meet on Monday as requested by Russia.

Ukrainian Prosecutor General Iryna Venedyktova announced Sunday that 410 civilians were found dead in recently recaptured towns near the capital as part of an investigation into possible war crimes by Russian forces. Images emerged showing bodies in civilian clothes strewn in the streets of Bucha, northwest of Kyiv.

Russia’s deputy representative to the U.N. Security Council, Dmitry Polyansky, said via Twitter on Sunday that Moscow had requested a meeting to be held on Monday “in connection with the monstrous provocation of Ukrainian radicals in Bucha.”

Russian forces are continuing to consolidate and reorganize as they refocus their offensive into the Donbas region of eastern Ukraine, the U.K. Ministry of Defense said in an intelligence update Monday.

“Russian troops, including mercenaries from the Russian state-linked Wagner private military company, are being moved into the area,” the ministry added.

Wagner is the best-known of an array of Russian mercenary groups and has ties to Russian President Vladimir Putin. The Russian company has deployed fighters to countries in the Middle East and Africa. U.S. Department of Defense spokesperson John Kirby told reporters last month that Wagner “has an interest in increasing their footprint in Ukraine.”

Ukrainian President Volodymyr Zelenskyy made a brief speech at the on Sunday night.

Zelenskyy, in a video message, said war is the opposite of music, but hopes soon the silence of death will be filled with the sound of music.

“The war doesn’t let us choose who survives and who stays in eternal silence. Our musicians wear body armor instead of tuxedos,” Zelenskyy told the audience. “They sing to the wounded. In hospitals. Even to those who can’t hear them. But the music will break through anyway.”

At least seven civilians are dead and 34 are wounded following shelling in Kharkiv, the region’s prosecutor’s office announced Sunday.

The shelling occurred Sunday evening in the city’s Slobidskyi district, according to the Kharkiv regional military administration Oleg Sinehubov, who added that children are among the victims.

Meanwhile, in Chernihiv, around 70% of the city has been destroyed, according to Mayor Vladyslav Atroshenko, who was speaking on Ukrainian TV.

He added that businesses are not operating. Ukrainian soldiers have been able to liberate several villages in the Chernihiv region in the past couple of days.

Following graphic images of casualties coming out of Bucha, Ukraine, after Russian military withdrawal, Ukrainian President President Volodymyr Zelenskyy has strong words about he called, “concentrated evil, in his daily address Sunday. Here are excerpts from that address:

“Hundreds of people were killed. Tortured, executed civilians. Corpses on the streets. Mined area. Even the bodies of the dead were mined!”

“Concentrated evil has come to our land. Murderers. Torturers. Rapists. Looters. Who call themselves the army. And who deserve only death after what they did.”

“I want every mother of every Russian soldier to see the bodies of the killed people in Bucha, in Irpin, in Hostomel. What did they do? Why were they killed? What did the man who was riding his bicycle down the street do? Why were ordinary civilians in an ordinary peaceful city tortured to death? Why were women strangled after their earrings were ripped out of their ears? How could women be raped and killed in front of children? How could their corpses be desecrated even after death? Why did they crush the bodies of people with tanks? What did the Ukrainian city of Bucha do to your Russia? How did all this become possible?”

“All partners of Ukraine will be informed in detail about what happened in the temporarily occupied territory of our state. War crimes in Bucha and other cities during the Russian occupation will also be considered by the UN Security Council on Tuesday.”

“We do not blame the West. We do not blame anyone but the specific Russian military who did this against our people,” Zelenskyy, who has pleaded with the U.S. and NATO allies to create a no-fly zone over Ukraine, a measure so far, that President Joe Biden and other Western leaders have refused to do, said.