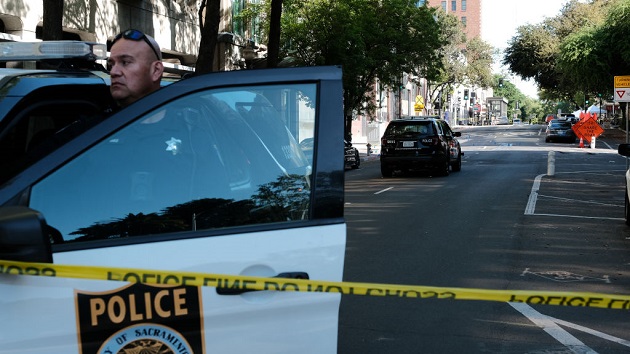 (SACRAMENTO, Calif.) — Sacramento police have arrested a suspected gunman in the shooting that killed six people in a popular nightlife area over the weekend.

Dandre Martin, 26, was identified as a “related suspect” in the shooting, which broke out on K Street in downtown Sacramento early Sunday morning just after a fight took place, the Sacramento Police Department said. Martin was arrested on assault and illegal firearm possession charges, police said.

More than 100 shell casings were recovered from the scene, according to police. Investigators believe multiple gunmen are responsible for the shooting and are sifting through hundreds of pieces of evidence, Sacramento Police Chief Kathy Lester said during a press conference Sunday afternoon.

Video posted on Twitter on Sunday showed people running through the street as the apparent sound of rapid gunfire could be heard in the background.

At least a dozen people were injured in the shooting, Lester said. The conditions of the injured victims were not immediately known, police said.

It is not known whether the alleged gunmen knew each other, Lester said. A large crowd was present at the time of the shooting, she added.

Sacramento Mayor Darrell Steinberg condemned the shooting during a news conference Sunday afternoon, describing it as “a senseless and unacceptable tragedy.”

“And I emphasize the word unacceptable,” Steinberg said. “Thoughts and prayers are not nearly enough. We must do more as a city as a state and as a nation.