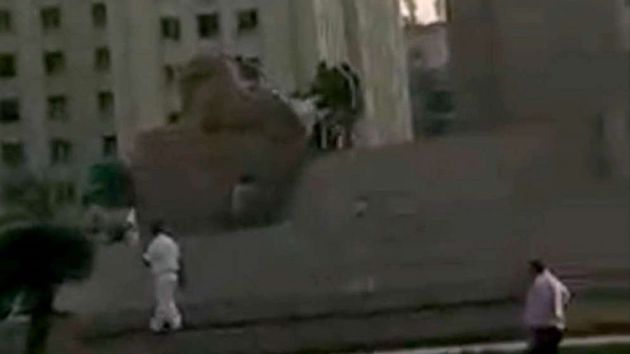 (CAIRO) —A man attempting to demolish one of four ancient sphinxes adorning the Tahrir square in Cairo was caught by security personnel, an eyewitness reports.

“I and my friends were in Tahrir when we saw someone climbing up to the head of one of the sphinxes. He was wielding a big hammer and shouting ‘Allahu Akbar’ before starting to hit it,” Abdallah Elbarawy, a 22-year-old law student at Cairo University, told ABC News.

“He was then captured by security guards, who took him away,” Elbarawy said.

Local media said the man, who was not identified, was being questioned.

An antiquities ministry source told ABC News that no damage was sustained to any of the sphinxes.

Last year, Egypt relocated the four ram-headed sphinxes to Tahrir in the heart of Cairo from the southern city of Luxor — a move criticized at the time by many archaeologists, who feared the artifacts could be damaged because of their exposure to air pollution and heat in the congested square.

The sphinxes were previously located in a courtyard behind the first pylon of the famed Karnak temple in Luxor.

After being transferred to Tahrir, the sphinxes were kept in wooden crates before being unveiled last April, shortly before Egypt held a procession for 22 royal mummies from the iconic square. They lie beneath a 90-tonne obelisk that dates back to the era of famous New Kingdom pharaoh Ramses II.

Egypt said it will soon re-open the Grand Avenue of Sphinxes, a 3,000-year-old road that connects Karnak Temple with Luxor Temple, to the public after completing excavation and restoration works in the ancient pathway.

The avenue is flanked by hundreds of ram-headed sphinxes, similar to the ones that were moved to Tahrir.