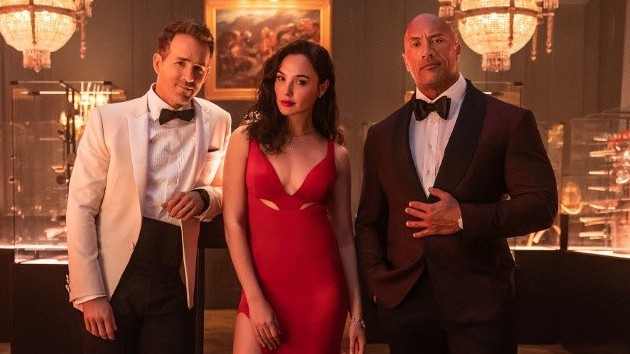 Netflix has released a new trailer for Red Notice, and in this one, we get a better idea of the plot.

Dwayne “The Rock” Johnson recruits Ryan Reynolds‘ character, noted as the “second-most wanted art thief in the world,” in an effort to nab the best one: Gal Gadot‘s character, known as The Bishop.

However, while she’s on the titular list, this trailer notes a twist: Gadot uses some computer wizardry to frame Johnson’s FBI agent John Hartley, landing him on Interpol’s Red Notice, and they both get locked up.

The situation sets up a death-defying prison escape sequence seen in an earlier trailer.

“If we catch her together, I can clear my name, and I’ll make you the number-one art thief in the world again,” Hartley promises Ryan’s Booth.

“Trusting a thief can be dangerous,” Bishop warns the FBI agent, a comment by which Booth gets comically offended.

The trailer not only shows the two men tangling with assorted bad guys, but the character played by Johnson — who had a wrestling nickname The Brahma Bull — is actually fighting a real bull.