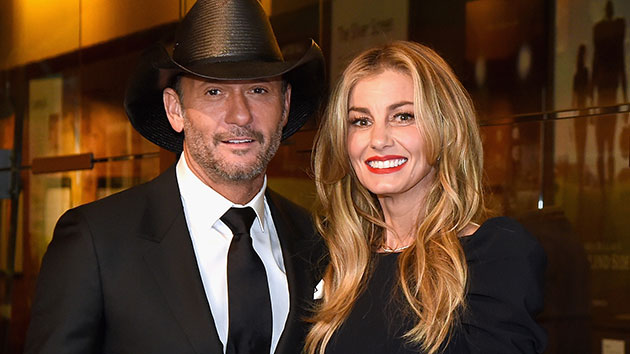 Wednesday marks Tim McGraw and Faith Hill’s 25th wedding anniversary, and Tim marked the occasion on social media by recounting the day they got engaged.

That day was actually the last in a string of several marriage proposals he gave to his fellow country superstar wife, Tim reveals: He’d asked Faith to marry him several times in the past, but she kept saying no.

“She said, ‘I’m not gonna get involved with another country singer. It’s just not gonna work out,’” he recalls. But something was different on that fateful day, when the couple were at an outdoor country festival in a trailer, and Tim was getting ready for his set.

“I had this…case that had this big mirror in it,” he explains. “She’s standing there, and we’re talking, and I said, ‘Look, let’s get married.’ And she says, ‘You’re asking me to marry you at a country music festival in a trailer house.’ I said, ‘Well, it’s pretty apropos, if you think about it.’”

Faith didn’t give Tim an answer then, and he went off to play his set. But when he returned to his trailer, he realized she’d finally accepted his proposal.

“Faith wasn’t there, but I looked at the mirror, and in lipstick, it said, ‘Yes! I’m gonna be your wife,’” he continued. “And we still have that mirror. It was the best day of my life, that’s for sure.”

Faith and Tim made it official on October 6, 1996, and have been inseparable ever since. The country superstar couple have since become parents to three daughters: Audrey, Maggie and Gracie.

25 years later and it’s still the best day of my life. Thanks for going on this journey with me. Love you @FaithHill ❤️ pic.twitter.com/DmxXCDnOH3