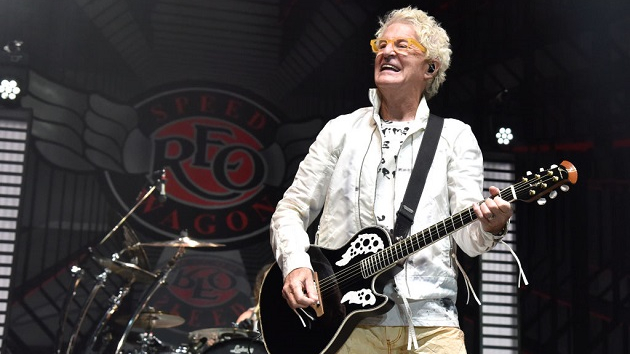 Cronin first joined the Illinois-based band in 1972 in time to record their second album, R.E.O./T.W.O., but he left the group because of creative differences during the making of their next record, Ridin’ the Storm Out.

In 1976, Kevin rejoined REO Speewagon and has fronted the band ever since. During the group’s heyday in the late 1970s and early ’80s, Cronin split main songwriting duties with guitarist Gary Richrath.  In 1978, REO scored minor hits with the Cronin-penned “Roll with the Changes” and “Time for Me to Fly,” which were both featured on the band’s You Can Tune a Piano, but You Can’t Tuna Fish album.

REO Speedwagon’s real commercial breakthrough came in 1980 with Hi Infidelity. The album spent 15 non-consective weeks at #1 on the Billboard 200 in 1981, more than any other album that year. It featured the chart-topping ballad “Keep On Loving You” and the #5 hit “Take It on the Run,” both written by Cronin. Hi Infidelity has gone on to be certified Diamond by the RIAA for sales of over 10 million in the U.S.

Numerous other Cronin-penned Billboard Hot 100 hits followed for REO Speedwagon during the ’80s, including “Keep the Fire Burnin’,” which peaked at #7 in 1982, and the band’s second chart-topping single, “Can’t Fight This Feeling,” which was #1 for three weeks in 1985.

Richrath was fired from REO over conflicts with Cronin in 1989, and Kevin has continued to lead the band. REO’s most recent studio album was the 2009 holiday collection Not So Silent Night…Christmas with REO Speedwagon, but the group still tours regularly.

The band’s next concert is scheduled for this Friday, October 8, in Boerne, Texas.