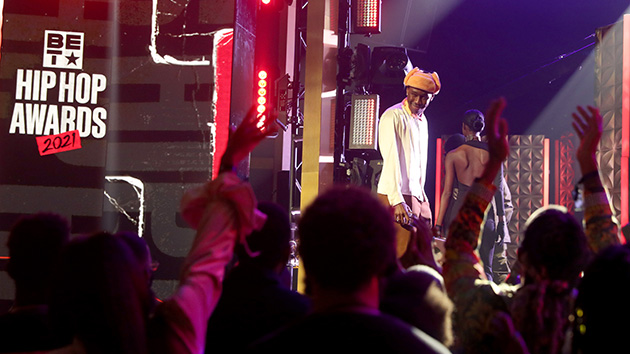 This year’s BET Hip Hop Awards was a star-studded event that included appearances by some of this year’s most respected emcees.

The evening’s big winners included Tyler, the Creator, who was received the inaugural Cultural Influence Award, as well as Hip Hop Album of the Year for Call Me If You Get Lost. Lil Baby won four awards, including Artist of the Year, and Cardi B and Megan Thee Stallion took home three trophies for “WAP.”

Young Thug & Gunna, Latto, Bia featuring Lil Jon, Baby Keem, Tobe Nwigwe, and Isaiah Rashad were just a few of the artists who took the stage to perform some of their hits. Meanwhile, hip-hop powerhouses Trina, Remy Ma and Rapsody presented some of the night’s top honors.

Hosted by DC Young Fly, Karlous Miller, and Chico Bean — also known as the comedy group 85 South — the show was fused with comedy skits and hip hop ciphers throughout the night.

Rapper-actor Nelly received the 2021 “I Am Hip Hop” Award from So So Def producer Jermaine Dupri before taking the stage to perform his own medley of songs, which included “E.I.”, “Country Grammar”, “Air Force Ones”, “Grillz”, “Ride With Me”, “Dilemma”, and “Hot in Herre”. Legendary rapper and 2021 Rock & Roll Hall of Fame inductee LL COOL J presented the first-ever “Rock the Bells Cultural Influence Award” to Grammy Award-winning rapper-producer Tyler, the Creator.

Before the night ended, Big Daddy Kane paid tribute to his fellow Juice Crew member, rapper Biz Markie, who passed away in July at the age of 57.

Hip hop album of the year
Call Me If You Get Lost, Tyler, the Creator

Lyricist of the year
J. Cole

DJ of the year
DJ Scheme

Producer of the year
Hit-Boy

Hustler of the year
Saweetie

Impact track
Nipsey Hussle feat. Jay-Z, “What It Feels Like”