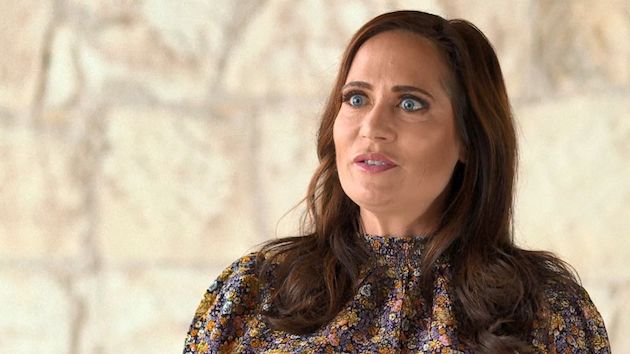 (WASHINGTON) — Stephanie Grisham, one of former President Donald Trump’s most senior and longest-serving advisers, says she is “terrified” that her former boss may run for office again.

“I am terrified of him running in 2024,” Grisham, who served as both Trump’s press secretary and first lady Melania Trump’s chief of staff, told “Nightline” co-anchor Juju Chang in a wide-ranging exclusive interview on the eve of the publication of Grisham’s new book.

Asked by Chang what scares her the most, Grisham painted a grim picture of what could happen if Trump ends up running again in 2024.

“I think he would foment more violence,” she said. “He won’t have consequences. He won’t need to be reelected again.”

“I think he will line his pockets,” she added. “I think his family will line their pockets. I believe that he wanted to help the country in the beginning; I believe he wants to help himself now.”

In her new book, titled “I’ll Take Your Questions Now,” out this Tuesday, Grisham describes a White House in perpetual chaos, where she says “casual dishonesty” flowed through the air “as if it were in the air conditioning system.” The book is filled with accusations about the former president, and includes a host of alleged wrongdoings that range from downplaying the seriousness of the coronavirus to making sexual comments about a young female White House staffer.

But amid all the turmoil laid out in the book, Grisham remained by the former president’s side for nearly his entire four-year term in the White House, before resigning after the Jan. 6 insurrection at the Capitol.

“How did you go from one of the loyalist loyals to one of their fiercest critics, seemingly overnight?” Chang asked Grisham, who responded, “Definitely not overnight. It’s kind of a journey.”

Grisham, who is perhaps best known for never holding a televised press briefing during her time as White House press secretary, has faced a barrage of criticism for speaking out now, nearly a year after leaving the White House.

The former president and his family have forcefully responded to the latest tell-all book by a former close ally, with Melania Trump’s office saying in a statement, “The author is desperately trying to rehabilitate her tarnished reputation by manipulating and distorting the truth about Mrs. Trump. Ms. Grisham is a deceitful and troubled individual who doesn’t deserve anyone’s trust.

“Stephanie didn’t have what it takes and that was obvious from the beginning,” former President Trump said in a statement. “Now, like everyone else, she gets paid by a radical left-leaning publisher to say bad and untrue things.”

Grisham has also received harsh pushback from some former colleagues, including former Trump White House Director of Communications Alyssa Farah, who responded to the book live during her guest-host appearance on “The View” Monday.

“First and foremost, I don’t believe in profiting off of public service. I had a chance to write my White House tell-all and declined. The American people, the taxpayers paid my salary. I’m not going to go write a book and cash in,” said Farah, who resigned from the White House in December following the election.

“Reading some of the reviews, some of the critics are saying, you know, if you’re admitting to lying then, what makes us think that you’re not lying now?” Chang asked Grisham about her role as press secretary.

“Well, I don’t think I’m admitting to lying at all,” Grisham responded. “I tried to give the press the most honest answers I could, and there were oftentimes I was given information that I knew to be true that perhaps wasn’t true.”

But Chang pushed back, pointing out that Grisham had already admitted that a 2019 tweet she posted targeting former Chief of Staff John Kelly had been untrue.

Beyond not holding a press briefing, Grisham writes in the book that she was once tasked by the former president with figuring out how to completely ban members of the media from the White House grounds. “I researched different places we could put them other than the press briefing room. Each time the president asked me about my progress on the matter, I let him know I was still working on options,” she writes.

“Should the American public believe what you’re saying now when you, in many ways, were non-responsive and not communicating transparently or honestly during — by your own admission?” Chang asked.

“Fair question — the fact is, the president never wanted me to do a briefing,” said Grisham who added that “I was glad that that was something he didn’t want from me, because I didn’t want to have to go out there and say something dishonest.”

Farah, however, pushed back on Grisham’s claim that Trump told her not to hold press briefings.

“That would surprise me,” Farah said. “When I worked for him, it was, ‘Go get out on TV, Alyssa. Kayleigh, go give a briefing.’ He wanted people out.”

“She could have done backgrounders in her office,” Farah said of Grisham. “But it seemed like she was largely MIA on the job.”

Grisham also claims in the book that she observed the former president, who has been accused of sexual misconduct by at least 18 women, develop an “unusual interest” and behave “inappropriately” toward a young female staffer during his time as president, including during one trip where he summoned the unnamed aide to his cabin on Air Force One, allegedly telling other staffers, “Let’s bring her up here and look at her ass.”

“What I do know is that he behaved inappropriately. And since the woman worked for me, I tried to protect her and keep his unusual interest in her under wraps,” Grisham writes. “If the president didn’t see her with the press corps, he would ask me where she was. He would ask me if she were coming with us on foreign trips. When she did come along on trips, he often asked me to bring her to his office cabin in the aircraft, which he’d rarely done with anyone else.”

“I wouldn’t leave her in the cabin with him. I always sat there,” Grisham told Chang. “And he would just talk to her about, you know, ‘Did you see my speech? What did you think?’ You know, I think have her compliment him.”

But Chang challenged Grisham, asking, “And yet in many ways were you helping in some ways normalizing his other inappropriate behavior and enabling in some way this behavior?”

“I’ve thought about that a lot,” Grisham replied. “At the White House, it’s not like there’s a human resources office that you can go to say, ‘Hey, the president of the United States is acting inappropriately.'”

Grisham’s claims about the staffer were corroborated by Farah, who said on “The View” that “I was aware of the situation and of the female and I did report it to the chief of staff.”

“It was a challenging situation I don’t know if anything was done,” she said.

“What were you worried that might happen?” Chang asked Grisham.

As the first lady’s chief of staff, Grisham had an up-close look at the woman she says Secret Service agents referred to as “Rapunzel.” Regarding the #FreeMelania hashtag that became a rallying cry for those who theorized online that the first lady didn’t want to be in the White House, Grisham said that idea was misguided.

Grisham also described what it was like to be the person to inform the first lady that her husband was being accused of an extramarital affair and was being sued by Daniels.

“That was tough. As a woman, I’ve been cheated on before, so that was painful for me,” Grisham recalled. “It was very, very awkward. I’ve never had to do anything like that before.”

Grisham also claimed that staffers had a secret nickname for the president’s daughter, Ivanka Trump, and her husband, Jared Kushner, who both held senior positions in the White House, referring to the pair as “the interns.”

“We called them the interns because as interns usually are, they come into places and think they know everything,” Grisham said.

In the book, which publisher HarperCollins calls “the most frank and intimate portrait of the Trump White House yet,” Grisham also claims Trump had an infatuation with dictators and writes how the former president allegedly sought to cozy up to Russia’s Vladimir Putin during an overseas trip for the Group of 20 summit in Osaka in 2019. Grisham alleges that during a private meeting before the press was brought into the room, Trump told Putin, “Okay, I’m going to act a little tougher with you for a few minutes. But it’s for the cameras, and after they leave we’ll talk. You understand.”

“Putin was coughing. He kept coughing, kept clearing his throat, and I did find it odd that he wouldn’t just take a drink of water … and he knows ways to get in someone’s head,” Grisham told Chang.

As one of Trump’s longest-serving political aides, Grisham’s time working for the former president dates back to his 2016 campaign when she served as a press wrangler before moving deeper into the Trumps’ inner circle. As other top aides resigned or were forced out — with some even speaking out against Trump while he was still in office — Grisham continued to stand by the president.

Grisham told Chang that one of her biggest regrets was not doing more from inside the White House during the early days of the COVID-19 pandemic when, as she alleges, Trump was thinking more about getting reelected than how to get the virus under control.

“It was about having him look presidential for reelection. I wish I would have told him he needs to wear a mask. I wish I could’ve been louder with that,” she said.

“Do you think that misinformation or dishonesty cost lives?” Chang asked about the White House’s response to the pandemic.

“Yes,” Grisham replied. “I will always think that, and I don’t know that I — you can ever forgive yourself fully for being a part of that.”