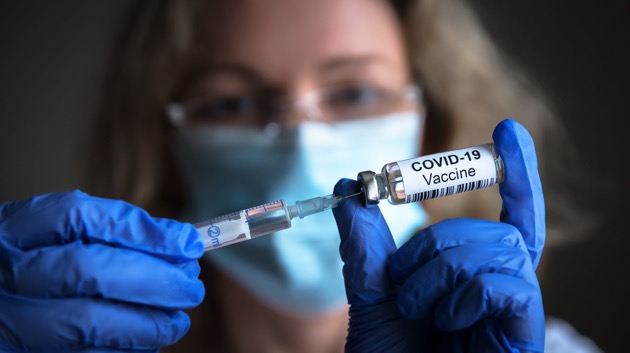 More than 693,000 Americans have died from COVID-19 while over 4.7 million people have died from the disease worldwide, according to real-time data compiled by the Center for Systems Science and Engineering at Johns Hopkins University.

Just 64.9% of Americans ages 12 and up are fully vaccinated against COVID-19, according to data from the CDC.

The CDC on Wednesday issued an urgent health advisory to try to increase vaccinations among women who are pregnant, recently pregnant or may become pregnant.

Just 31% of pregnant people have been vaccinated, the CDC said.

“Cases of COVID-19 in symptomatic, pregnant people have a two-fold risk of admission into intensive care and a 70 percent increased risk of death,” the CDC said.

The agency said it’s calling “on health departments and clinicians to educate pregnant people on the benefits of vaccination and the safety of recommended vaccines.”

Approximately 118 million Americans remain completely unvaccinated, including 70 million over the age of 12, according to federal data.

On Wednesday, the U.S. is likely to reach a significant vaccine milestone of 200 million adults vaccinated with at least one dose.

Alaska currently has the country’s highest infection rate with daily cases up by nearly 2,500% since mid-July, according to federal data.

West Virginia, once a model for its vaccine rollout, now has more hospitalized patients than at any point in the pandemic.

But states including Florida, Mississippi, Louisiana and Georgia appear to be improving, federal data show.

Nationwide, around 79,000 people are hospitalized, down by more than 20% since the beginning of September. Even so, ICU capacities in several states, including Alabama, Georgia, Idaho, Kentucky and Texas, remain at critical levels.

United Airlines plans to immediately terminate up to 593 employees who chose not to get vaccinated under the airline’s mandate.

United said more than 99% of its employees chose to get vaccinated.

Roughly 2,000 employees sought a medical or religious exemption. Because of ongoing litigation, United said it will not reveal how many employees were granted exemptions. United says anyone who applied for an exemption will still be allowed to go to work until a final decision is made on how to handle their cases. The airline expects a decision by Oct. 15.

The Food and Drug Administration’s approval for the Pfizer vaccine for children between 5 and 11 years old could begin in November, possibly before Thanksgiving, a federal official with knowledge of the agency’s process told ABC News.

Another official told ABC News that Pfizer has yet to complete its full submission, and that the FDA is not going to be rushed on this.

Pfizer submitted it initial data on younger children to the FDA earlier Tuesday.

The FDA already has scientists reviewing that initial data submitted by Pfizer, according to the official.

Sep 28, 5:07 pm
Forecasters expect US pandemic to continue to improve

The COVID-19 Forecast Hub’s ensemble forecast, used by the CDC, predicts that U.S. hospitalizations will continue to fall — perhaps to as low as 4,600 per day — by Oct. 11.

Pfizer CEO Albert Bourla told The Atlantic Tuesday that the timeline on shots for children ages 5 to 11 is up to the FDA.

“If approved, we will be ready to have the vaccine available,” he added.

Vaccines may be authorized and available for 5- to 11-year-olds in October or November.

Bourla said he thinks once kids get vaccinated, the U.S. will get a “strong push” toward herd immunity.