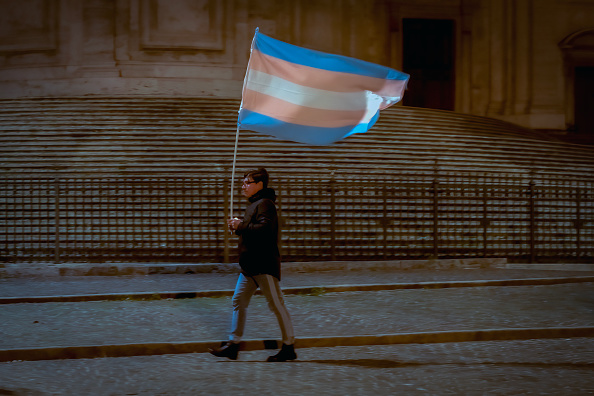 (NEW YORK) — Ky Schevers is fighting back against the anti-trans movement she once took part in.

Schevers was assigned the sex of female at birth and later chose to start gender-affirming care by taking testosterone to transition from female to male in her mid-20s. She stopped taking testosterone, though, in the years that followed while she continued to explore and question her gender, later falling into an online anti-trans group of “detransitioners” – people who once did but no longer identify as transgender.

Now, Schevers says she has “retransitioned,” identifying as transmasculine and gender queer, which means she identifies with both genders. Schevers uses she and her pronouns, but heavily identifies with masculinity, as defined by the LGBTQIA+ Health Education Center states.

She says she considers herself to be a part of the transgender community.

When Schevers initially stopped taking testosterone, she sought out advice and companionship in online forums about detransitioning. In this virtual community is where she began to adopt anti-trans beliefs that misogyny and a patriarchal society caused her to initially transition from female to male. In blog posts, YouTube videos, interviews and workshops, she spread and promoted these beliefs. These posts became a popular tool for anti-trans activists looking to discredit the trans community in the name of feminism.

A 50-year study in the Archives of Sexual Behavior performed in Sweden estimated that less than 3% of people who medically transitioned experienced “transition regret.” Other studies have estimated similar results, some citing even lower figures.

Despite this low percentage, these individuals have become a focal point of anti-transgender legislation and activism.

More than 300 proposed bills across the country have targeted LGBTQ Americans in the last year, according to the Human Rights Campaign. Health care for trans youth in particular has become the target of such efforts.

Before the ages of 16-18, youth are treated with reversible treatments based on guidance from the U.S. Department of Health and Human Services. Irreversible medical interventions, such as surgeries, are typically only done with consenting adults, or older teens who have worked through the decision with their families and physicians over a long period of time, physicians across the country have told ABC News.

Despite these common practices, officials in many states have launched efforts to crack down on gender-affirming care for minors. Some legislators have cited disputed research on this topic, stating that the majority of gender dysphoric youth will grow out of their dysphoria. The methodology in these studies has been highly critiqued.

A recent large study from Harvard found that gender-affirming surgery was associated with improved mental health outcomes in those who are transgender.

Another recent large study from Harvard found that even among those who do go on to detransition, it is often due to external pressures such as stigma and non-acceptance in their environments, rather than a sudden resolution of gender dysphoria.

But that’s where “detransitioners” come in. Detransitioned activists have often testified in public hearings on policies concerning the transgender community.

“I was 30 and at the end of my rope when I transitioned … If I made this mistake as an adult, a young girl could too,” said one detransitioned speaker at the Oct. 28 Florida medical board hearing concerning a ban on gender affirming health care for youth. “Not only did my surgery exacerbate my mental health issues, I now struggle with physical complications as well.”

Another speaker at the hearing, who said she started gender-affirming treatments at the age of 16 and regrets it, spoke about struggling with her mental health while transitioning. She urged the board to ban hormones for people under 18 and surgeries for people under 21. “In 2019, I had a life-changing encounter with Jesus and began to find deep healing within myself. After nearly 4 years of being on testosterone, I decided to detransition and accept my womanhood,” she said.

The Florida Medical Board later passed a ban on gender-affirming care for youth. The decision would prohibit providers from administering gender affirming care, including puberty blockers, hormones, cross-hormone therapy and gender-affirming surgery for people under the age of 18.

“I never liked people who call transitioning mutilation or call trans bodies mutilated…A lot of them called trans people delusional,” Schevers said. “Living as a trans person was something that people did to survive and actually, I didn’t think of it as crazy or irrational because I had lived that life.”

She continued, “I get why someone would do this. Like, it did help me. I did get satisfaction from transitioning and I had to rationalize that experience and make it fit with this anti-trans ideology.”

Schevers said cracks began to show in her beliefs as more of the detransitioners and other activists she worked with began to partner with far-right groups like the Proud Boys on an anti-trans platform.

“That was kind of a huge wake-up call,” said Schevers. “It didn’t make sense to ally with the people who were creating the oppressive conditions.”

Her use of the hormone testosterone helped her embrace her gender queer identity, she now says.

When Schevers sees or hears anti-transgender detransitioners speak about their experiences, she thinks of her past self. She says she feels guilty, like she set the stage for them.

Schevers says she wants people to turn their attention to the dangers of anti-trans outreach to youth as well as the ongoing legislative attacks on trans Americans.

An Alabama law made it illegal to give any type of gender affirming care to anyone under the age of 18. This would criminalize parents and physicians.

These organizations say that research does show that the aforementioned gender-affirming treatments are safe and effective. Some, like the American Medical Association, even deem it “medically necessary.”

Gender exploration is an ongoing journey for Schevers, and she hopes the trans and gender queer youth in the U.S. continue to be able to access a journey of their own.

“I do feel more firmly rooted in who I am. It’s easier for me to accept myself as someone who has, like, multiple genders,” Schevers said.