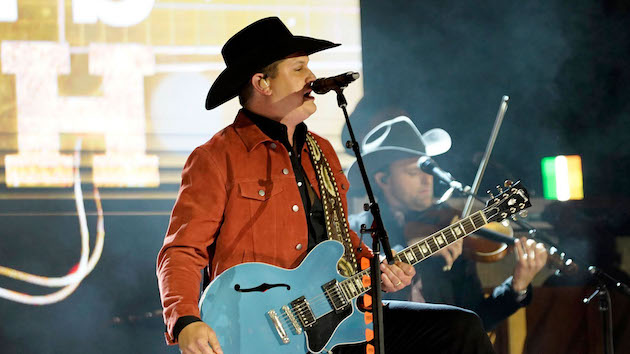 Jon Pardi introduces fans to some of his favorite on-the-road items in a new video interview with CMT, showing off some of the essentials that make his tour bus feel like home.

Some of Jon’s tour must-haves are self-explanatory, like a good bottle of whiskey, his acoustic guitar and his choice of workout gear (kettle bells, the singer explains, because they “don’t take up a lot of space” on the bus.)

But other items are more personalized to his music. For example, Jon shows off his custom boot jack, which has his name on it and was gifted to him at the San Antonio rodeo.

Then there’s a product that Jon spent quite a bit of money on, but — so far, at least — hasn’t lived up to the hype. “These are my super uncomfortable $700 slippers,” the singer says, holding up the Gucci shoes in question. “I thought they’d be great, but they dig into my heels, so I have to wear the non-cool socks. I still have to put some miles on it with my non-cool socks before they become really comfortable — I was told.”

Stay tuned for whether or not Jon ever breaks in his shoes, but worst-case scenario, they’ll be a fun thing to send to fellow country star Parker McCollum, Jon says, adding “he’s very Gucci.”

Jon’s tour essentials list will likely soon grow to include diapers, a stroller and a crib: He announced this week that he and wife Summer are expecting their first baby in early 2023.