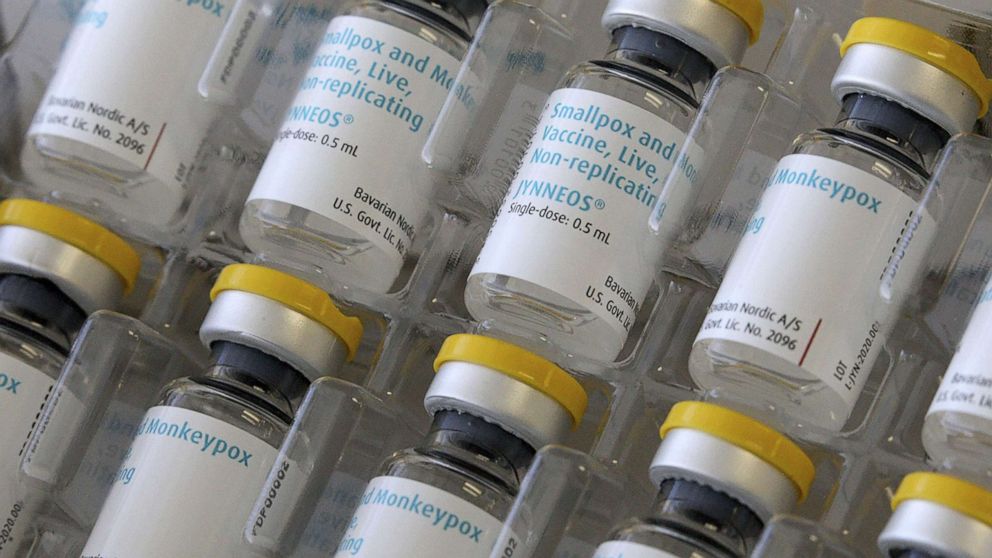 (NEW YORK) — With over 6,000 cases of monkeypox confirmed in the United States, including five children, the demand for the monkeypox vaccine is high.

And while the current vaccine, JYNNEOS, is approved only for adults ages 18 and older, it has been administered to children in the U.S. on a case-by-case basis, according to the Food and Drug Administration.

The FDA confirmed to ABC News that “numerous” children have been granted access to the vaccine through a special permission process.

If a doctor decides a person under 18 was exposed to monkeypox and the benefit of the vaccine is greater than any potential risk, they can submit a request to the FDA. Only children with direct exposure are granted access, and even then access is decided on a case-by-case basis

The FDA declined to state exactly how many children have received the vaccine to date through this special permission process.

The JYNNEOS vaccine, delivered in a two-dose regimen, has not been tested through clinical trials in children.

There have been no “adverse events to date” in delivering the vaccine to children in the U.S., and similar vaccines have been tested in children without serious safety concerns, according to the Centers for Disease Control and Prevention.

“JYNNEOS contains a non-replicating Vaccinia virus. While JYNNEOS has not been studied specifically for children or adolescents, the same non-replicating Vaccinia virus in the JYNNEOS vaccine has been used in studies as part of vaccines against other diseases including tuberculosis, measles, and Ebola,” the CDC said in a statement. “These studies included children as young as 5 months old, and no serious safety concerns were reported.”

Given the case-by-case basis of administering the monkeypox vaccine, there is no availability for mass vaccination of children at this time.

Children under the age of 8 are among those the CDC considers at “increased risk” for developing more severe illness if infected with monkeypox, along with pregnant people, people who are immunocompromised and those who have a history of atopic dermatitis or eczema.

Experts are not sure why children are at increased risk for severe illness, but it may be due to their immune systems and the fact that “younger children are sometimes more susceptible to some viral infections,” Dr. Richard Malley, senior physician in pediatrics, division of infectious diseases, at Boston Children’s Hospital and a professor of pediatrics at Harvard Medical School, told ABC News.

Monkeypox, also known as MPX, is spread primarily through direct, skin-to-skin contact between someone who has the virus and someone who does not, according to the CDC.

Typically, the disease begins with a fever, headache, fatigue, chills and muscle aches. The disease is similar to smallpox, however, monkeypox also causes swollen lymph nodes.

Within one to three days of initial symptoms, those infected typically develop a rash either on their face or other parts of the body, according to the CDC.

Per the World Health Organization, the lesions — or rash — start out as dark spots on the skin before progressing to bumps that fill with fluid.

Antiviral medications such as Tecovirimat, which is available for children, are currently being used for treatment of monkeypox.

Officials in the U.S. and around the world have expressed concern that there are not enough monkeypox vaccines to address the emerging crisis. With demand increasing, U.S. health officials have reported that 1.1 million doses of the JYNNEOS vaccine will be allocated to states and jurisdictions across the country.

Moderna, the maker of a COVID-19 vaccine, said Wednesday they have initiated a research program to consider whether the company could create a monkeypox vaccine with mRNA technology.

Any new vaccine would still need to go through the regulatory authorization process, which can take weeks to months, even in special circumstances.

Now that the Biden administration has declared the current monkeypox outbreak a public health emergency, the FDA could move to issue an emergency use authorization for the JYNNEOS vaccine for children under 18.

The FDA told ABC News it would still need to go through a process to evaluate if it would want to authorize the vaccine for a younger population.