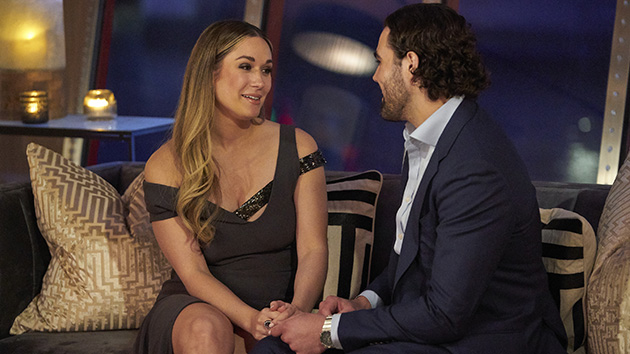 Following last week’s shocking rose ceremony which split the the guys into two groups — team Gabby and team Rachel — Monday’s episode of The Bachelorette found the men boarding the Virgin Voyages Valiant Lady and setting sail across Europe on their journey to find love.

The first stop was Paris, France, where Gabby and Jason shopped for berets in the district of Montmartre, and Rachel and Tino learn the art of French crêpes near Notre Dame. Both dates went well and both men received roses.

The next day, Gabby’s group date challenged her men to show their willingness to fight for her love — literally — with a series of boxing matches, cheered on by Rachel and her group of guys, who seemed more focused on the competition than they were on her. Spencer earned Gabby’s date rose, while Rachel’s men got a tongue lashing from Rachel, who expressed her disappointment in them, saying they made her feel “hurt” and “unseen.”

Later, Rachel and her group paid a visit to a castle for a lesson in the art of romance, where Tyler‘s vulnerability earned him a private dinner with Rachel and a date rose.

Rachel’s nearly perfect day was spoiled, however, when James “Meatball” — who got a second chance after originally turning down her rose at last week’s ceremony — revealed Hayden’s vulgar comments about the ladies, in response to their reaction to him calling Gabby “rough around the edges” last week. That led Rachel to take matters into her own hands, showing Hayden the door.

Meanwhile, Logan, another of Rachel’s suitors, secretly revealed to host Jesse Palmer that he had stronger feelings for Gabby. Unsure how to handle the situation, the 26-year-old videographer went on to accept Rachel’s rose at the final rose ceremony.

The Bachelorette returns Monday at 8 p.m. ET on ABC.