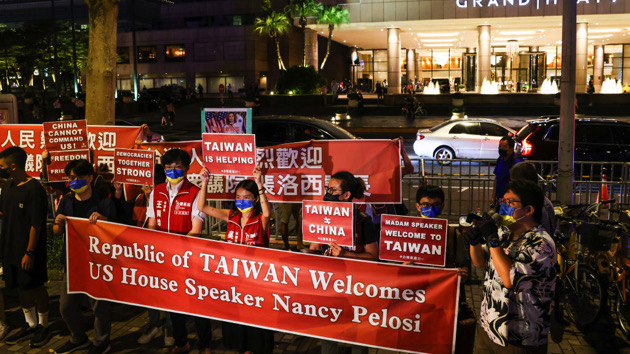 (TAIPEI, Taiwan) — U.S. House of Representatives Speaker Nancy Pelosi arrived in Taiwan on Tuesday despite repeated warnings not to from mainland China, which claims the island democracy as its own territory.

Pelosi and members of a congressional delegation landed at Taipei Songshan Airport in the Taiwanese capital at just after 10:40 p.m. local time as part of her tour of Asia. She visited Singapore on Monday and Malaysia on Tuesday. Her office previously said she would also travel to South Korea and Japan but didn’t mention a stop in Taiwan, until after her plane touched down under the cover of darkness Tuesday night.

“Our Congressional delegation’s visit to Taiwan honors America’s unwavering commitment to supporting Taiwan’s vibrant Democracy,” Pelosi and the delegation said in a joint statement Tuesday. “Our visit is part of our broader trip to the Indo-Pacific — including Singapore, Malaysia, South Korea and Japan — focused on mutual security, economic partnership and democratic governance. Our discussions with Taiwan leadership will focus on reaffirming our support for our partner and on promoting our shared interests, including advancing a free and open Indo-Pacific region. America’s solidarity with the 23 million people of Taiwan is more important today than ever, as the world faces a choice between autocracy and democracy.”

“Our visit is one of several Congressional delegations to Taiwan — and it in no way contradicts longstanding United States policy, guided by the Taiwan Relations Act of 1979, U.S.-China Joint Communiques and the Six Assurances,” they added. “The United States continues to oppose unilateral efforts to change the status quo.”

Just minutes after Pelosi’s arrival in Taiwan was confirmed, China’s largest state-run news agency, Xinhua, announced that live-fire military drills would be held in the airspace and waters surrounding and close to Taiwan from Thursday to Sunday.

Beijing considers any official contact with Taiwan a recognition of its democratically elected government, which the mainland’s ruling Communist Party asserts has no right to conduct foreign relations.

Pelosi is the most senior U.S. official to visit Taiwan in a quarter century. Her arrival came on the heels of fiery reactions from Chinese officials amid reports that she was planning such a trip.

Zhao Lijian, spokesperson for the Chinese Ministry of Foreign Affairs, told a press briefing on Monday that Beijing “will take firm and strong measures” if Pelosi were to visit Taiwan.

“We want to once again make it clear to the US side that the Chinese side is fully prepared for any eventuality and that the People’s Liberation Army of China will never sit idly by, and we will make resolute response and take strong countermeasures to uphold China’s sovereignty and territorial integrity,” Zhao said. “We have on many occasions stated our grave concern and solemn position that we firmly oppose Speaker Pelosi’s attempted visit to Taiwan region, and will take firm and strong measures to safeguard national sovereignty and territorial integrity.”

“The One China principle is what underpins peace and stability across the Taiwan Strait,” he added. “It is the United States that has constantly distorted and hollowed out the One China policy and made irresponsible remarks on the Taiwan question, creating tension across the Strait. The U.S. side lately has begun to stress the need to safeguard the sovereignty and territorial integrity of each country. We hope that the U.S. side should first act as it speaks on the Taiwan question and must not play the double-standard game.”

Under the so-called “One China principle”, Beijing regards Taiwan as their territory, a renegade province to be reunified — by force if necessary — with the mainland. The U.S. has a “One China Policy” recognizing the people of Mainland China and Taiwan being part of “One China,” that Beijing is China’s sole legal government and does not support an independent Taiwan, but considers the matter “unsettled.” Washington is also militarily supportive of the self-governing island and maintains extensive commercial and unofficial ties.

Taiwan split from mainland China in 1949, following a civil war between the Nationalist Party’s forces and those of the Communist Party. As the communists took control of the mainland, the nationalists retreated to the island of Taiwan where they established their new capital.

Both sides agree that they are one country but disagree on which is the national leader. Although they have no formal relations, the island’s economy remains reliant on trade with the mainland.

The U.S. switched diplomatic recognition from Taipei to Beijing in 1979. The Taiwan Relations Act, which went into force that same year, requires Washington to provide Taiwan with the means to defend itself.

Hua Chunying, a senior spokesperson for the Chinese foreign ministry, appeared to dial down the rhetoric on Tuesday before Pelosi’s arrival was officially announced, telling reporters that Beijing and Washington “have maintained close communication.”

“China has repeatedly and unmistakably expressed to the U.S. side our strong opposition to Speaker Pelosi’s potential visit to Taiwan,” Hua said. “And we hope that two U.S. officials will be very clear about the importance and sensitivity of this issue and how dangerous this issue could be.”

While the Chinese foreign ministry has not yet summoned U.S. Ambassador to China Nicholas Burns in protest, Hua noted: “I think when appropriate, we will be in touch with the U.S. ambassador.”

Unlike Zhao, she would not comment on any military response to Pelosi’s visit and deferred the question to a spokesperson for the ruling party’s military, the People’s Liberation Army.

White House spokesperson John Kirby told a press briefing on Monday that Beijing is seemingly laying the groundwork to carry out “military provocations” in response to Pelosi’s possible visit to Taiwan.

“China appears to be positioning itself to potentially take further steps in the coming days and perhaps over longer time horizons,” Kirby said.

Kirby told reporters that the “potential steps” China may take in response “could include military provocations, such as firing missiles in the Taiwan Strait or around Taiwan, operations that break historical norms such as a large-scale air entry into Taiwan’s air defense identification zone” or “air or naval activities that crossed the median line; military exercises that could be highly publicized.” He said the last time Beijing fired missiles into the Taiwan Strait was in 1996.

There could also be measures taken “in the diplomatic and economic space,” Kirby said, “like Beijing’s public assertions last month that the Taiwan Strait is not an international waterway.”

When asked what planning was “being done in advance to ensure there won’t be any dangerous fallout if she does indeed go to Taiwan,” Kirby told reporters he could “assure” that Pelosi would be able to “travel safely and securely.”

“The speaker makes her own decisions,” he added. “And what we did was provide her context, analysis, facts, information, so that she could make the best decision possible for every stop, for every overseas travel.”

Kirby cast the escalating tensions as fueled by China, which the U.S. was “not threatening.” He said a potential visit from Pelosi would have precedent and would not “change the status quo” regarding China and Taiwan.

But Hua told reporters Tuesday that there would be no “excuse” for a visit by Pelosi.

“The wrong actions of individual U.S. politicians in the past should not set a precedent, much less an excuse for the US to make mistakes on the Taiwan issue,” she said.