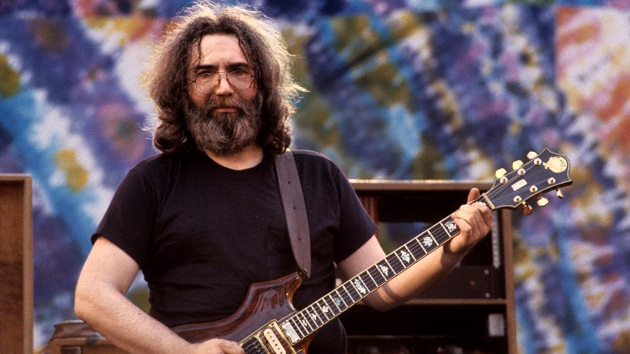 The singer/guitarist was the de facto leader of The Dead, inspiring an entire subculture of “Deadheads” who’ve embraced the San Francisco area group’s mix of rootsy, laid-back music and psychedelic jams, as well as the counterculture lifestyle the band espoused.

Garcia co-wrote most of The Dead’s songs, usually in collaboration with lyricist Robert Hunter, including well-known tunes like “Casey Jones,” “Ripple,” “Friend of the Devil,” “Truckin’,” “Bertha,” “Alabama Getaway” and “Touch of Grey.”

Outside of The Grateful Dead, Garcia was involved in a variety of solo and side projects, including the Jerry Garcia Band, the bluegrass group Old and in the Way and as a duo with mandolinist David Grisman. He also lent his talents to many other artists’ recordings.

Garcia was inducted into the Rock & Roll Hall of Fame as a member of The Grateful Dead in 1994. When he declined to attend the ceremony, his bandmates jokingly brought a life-size cutout of him to the event.

Jerry died of a heart attack on August 9, 1995, at age 53. Since his passing, Garcia’s surviving Dead bandmates have carried on his legacy by continuing to perform and record — together, individually and in varying combinations.

In 2015, Garcia was posthumously inducted into the Songwriters Hall of Fame alongside Hunter, who died in 2019 at age 78.

A variety of events have been scheduled to commemorate Garcia’s milestone birthday. Among them, three Major League Baseball teams will be hosting Jerry Garcia-themed celebrations at their home games in the coming days — the New York Yankees on Monday, the San Francisco Giants on Tuesday and the Boston Red Sox on August 9.