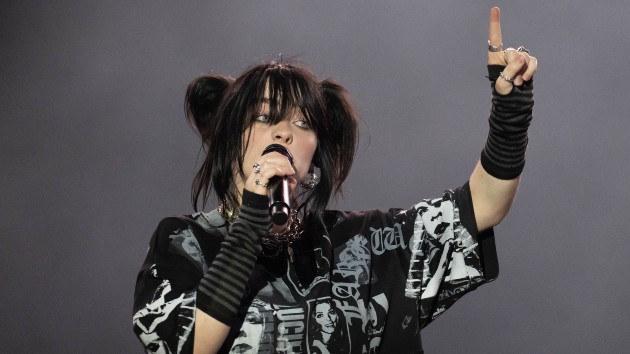 Has it really been a year since Billie Eilish released her Happier than Ever album?

The Grammy winner celebrated the sweet anniversary with her fans via a suprise intimate concert at Amoeba Music, an independent record store in Hollywood, on Friday. Billboard reports fans lined up outside the landmark location — some dressed head to toe in Billie merch — to get into the surprise show.

The “bad guy” singer was met with cheers and shouts when she appeared onstage and dove into a performance of fan-favorite “Billie Bossa Nova.” Her brother, FINNEAS, assisted with an acoustic guitar.

Aside from singing tracks off her sophomore album, Billie also performed her newest track, “TV.”  The topical track reflects the singer’s concerns about the current political and pop culture landscape.

Billie intended to make her pit stop a three-song deal, which she had intended to close out with her album’s title track. But, she had a change of heart and instead asked her fans what song they really want to hear. Fans shrieked for “Getting Older,” and the two singers performed an acoustic rendition.

The Oscar winner took a moment to salute her album before heading offstage and told the audience, “Not only is this the anniversary of the album, it’s also [Finneas’] birthday [on Saturday]. He’s going to be 25!”

She then delighted fans by performing “Happier than Ever.”

Billie released her sophomore album on July 30, 2021.  It was nominated for Album and Best Pop Vocal Album of the Year at the 2022 Grammy Awards.