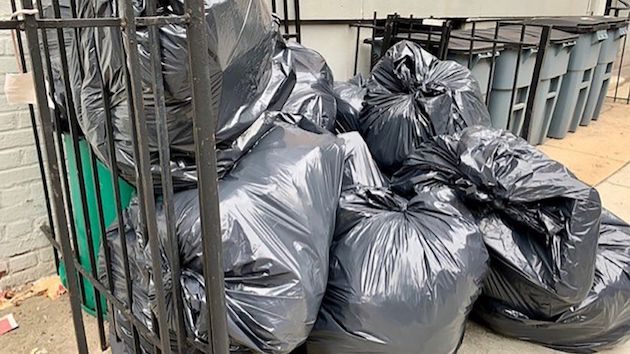 (NEW YORK) — Nothing gets New Yorkers steamed like traffic woes and close encounters with the native wildlife — a.k.a. rats. Now the city is considering changes to trash pickup rules that could affect both.

The department says it’s “strongly considering” requiring individual black trash bags to be placed outside after 8 p.m. The city will pick the bags up during overnight hours to minimize time on the street.

“New Yorkers put millions of pounds of trash and recycling on the street starting at 4pm – right as the evening rush is getting underway – and then it stays out, serving as a nightclub for rats and other pests, until it’s collected. Well soon, we’re going to try to shut the club down,” the department said in a statement.

Carve-outs under consideration would apply to most commercial and residential buildings.

Residential building owners would be permitted to put their trash out at 6 p.m., to conform to daytime maintenance staffing, as long as they place the trash in a bin with a secure lid.

Businesses would be permitted to put their trash out in the hour before closing for the day, to minimize staffing disruption, as long as the trash is also in bins with secure lids. For many businesses, that would be in the 4 p.m. or 5 p.m. hour

For their part, the sanitation department will shift to picking up more trash in the midnight to 8 a.m. shift, prioritizing the single bags. That will also help get the sanitation vehicles off the roads earlier, easing street traffic during the morning commute.

The aim is for residents, particularly those using individual black bags, to try to put their trash out later at night and for sanitation to try to pick it up earlier in the morning, which will help ease the rats and the traffic concurrently.

The Rent Stabilization Association, which represents 25,000 owners of more than 1 million apartments in the five boroughs, told ABC News the policy will likely not eliminate the rat issue entirely.

“This is not going to alleviate the city’s rat problem,” a spokesperson for the association said. “Rats aren’t on a feeding schedule.”