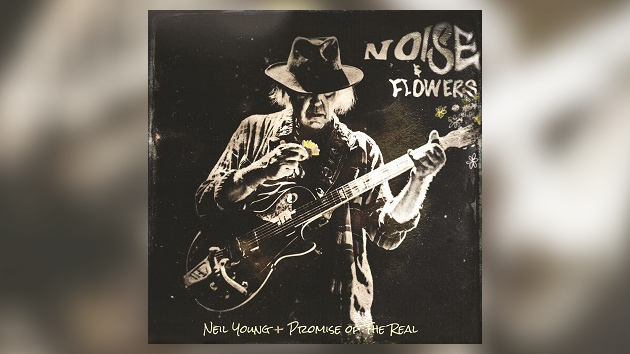 Neil Young has made available a live version of his 1995 song “Throw Your Hatred Down,” recorded with his backing group Promise of the Real while on tour in Europe in 2019, as an advance digital track from his upcoming album Noise & Flowers.

As previously reported, Noise & Flowers will be released on August 5 on audio and video formats. The album and film, which were recorded during Young’s nine-date 2019 European tour with Promise of the Real, are dedicated to Neil’s longtime friend and manager Elliot Roberts, who died at age 76 just a couple of weeks before the trek was launched.

Noise & Flowers, which can be preordered now, will be available on CD, as a two-LP vinyl set, via digital formats and as a deluxe CD/two-LP/Blu-ray collection featuring the film on the Blu-ray disc. In addition, a standalone Blu-ray can be purchased exclusively at Young’s Greedy Hand Store. The film was co-directed by Young and his wife, actress Daryl Hannah, under their Bernard Shakey and dhlovelife pseudonyms.

Those who purchase Noise & Flowers at the Greedy Hand Store will receive a high-res digital download of the album from Young’s Xstream Store at his Neil Young Archives website.

“Mr. Soul”
“Everybody Knows This Is Nowhere”
“Helpless”
“Field of Opportunity”
“Alabama”
“Throw Your Hatred Down”
“Rockin’ in the Free World”
“Comes a Time”
“From Hank to Hendrix”
“On the Beach”
“Are You Ready for the Country”
“I’ve Been Waiting for You”
“Winterlong”
“F***in’ Up”