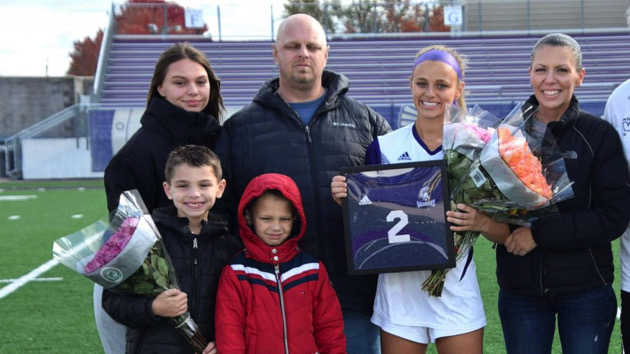 (HIGHLAND PARK, Ill.) — Eight-year-old Cooper Roberts, who was enjoying a Fourth of July parade when he was shot in the chest in the Highland Park, Illinois, mass shooting, is now paralyzed from the waist down, his mother, Keely Roberts, said.

The bullet went into his back and exited his chest, “which did significant damage throughout his body, including to his aorta, liver, esophagus and spinal cord,” Roberts said in a statement Wednesday.

Cooper remains in the hospital recovering from multiple surgeries and infections, and will need another heart surgery, she said.

“Cooper has been asking me — will I walk again? Will I have to be in a wheelchair forever?” Roberts went on. “I have been straight with him, because I have to be … we don’t know what kind of mobility he will have.”

Roberts herself was shot in two parts of her leg and needs ongoing orthopedic treatment.

Cooper’s twin, Luke, was hit by shrapnel. While his physical injuries were minor, “what he has to carry is devastating,” Roberts said.

“To hold a tourniquet on his mother’s leg … to see his twin brother’s lips go gray … to sit covered in our blood as good Samaritans provided the on-the-spot first-aid that kept us both alive… it’s too much for anyone, much less an 8-year-old,” she wrote.

Seven were killed and dozens were injured in the mass shooting. The suspected gunman is in custody.

“While I — along with Cooper and my entire family, should feel a lot of hate right now — I do not. My family does not. I find myself feeling that I have seen much more kindness than evil,” Roberts said.

The mom of six thanked the community members at the parade who rushed to help and all of the doctors and nurses who have cared for Cooper.

“They saved my son’s life,” she said. “On a holiday, when many were not in, they stepped up and made the impossible possible. There was someone who made sure to be available to run back and forth to a blood bank as needed for Cooper. Those surgeons spent six hours in the operating room refusing to let Cooper die — patch-working his liver, aorta, esophagus — again and again and again pouring blood transfusion after blood transfusion into his body.”

“The fact that Cooper is still here with us today is a miracle,” she added.

She also credited the doctors and nurses for keeping the family’s spirits up and helping Cooper stay “the happy, sweet little boy he has always been.”

Cooper and Luke “are good, sweet boys who love everyone and want good for everyone they know,” Keely Roberts said. “Their lives are so much more and better than this terrible thing than was done to them.”

The suspected mass shooter was indicted Wednesday on 117 counts. He has not entered a plea and is due in court on Aug. 3.