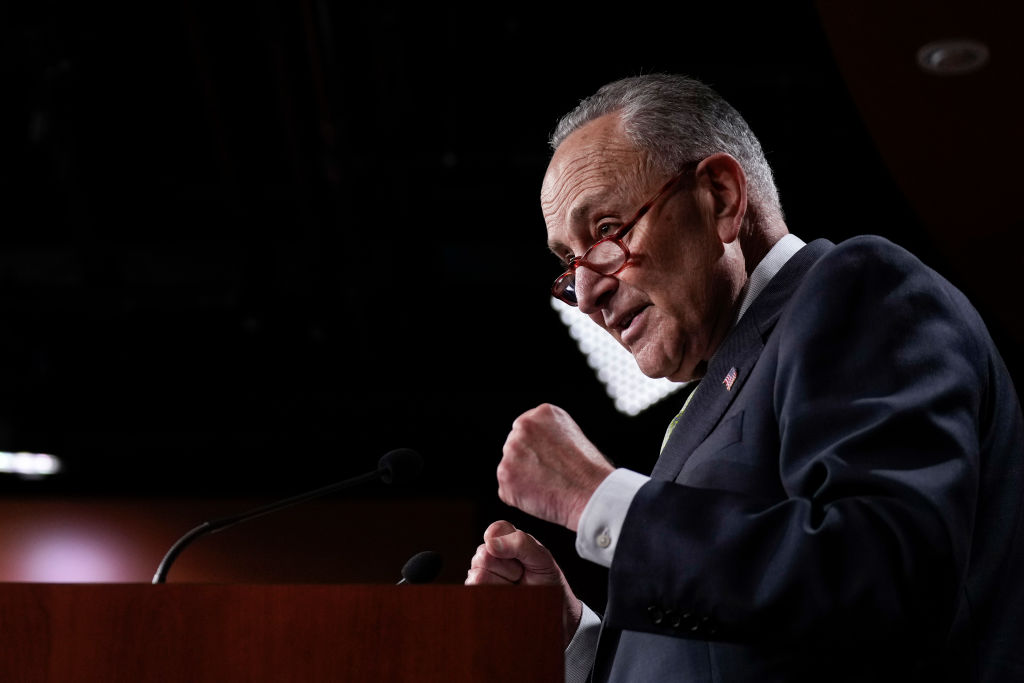 Schumer urged fellow Democrats to stay united to get the Inflation Reduction Act across the finish line via reconciliation before the chamber breaks next week for their August recess. The proposal would expand health care subsidies; allow Medicare to negotiate on prescription drugs; spend nearly $400 billion on climate and energy policies and raise taxes on corporations and the wealthy.

“It will require us to stick together and work long days and nights for the next 10 days,” Schumer said, according to a Democrat in the room. “We will need to be disciplined in our messaging and focus. It will be hard. But I believe we can get this done.”

Democrats’ proposed climate, tax and health care bill had been in limbo after Manchin, one of the most conservative Democrats in the 50-50 Senate, said earlier this month that he was opposed to additional spending on climate policies or tax changes as the country faces historically high inflation.

But in an apparent reversal, Manchin said Wednesday that he and Schumer had reached an agreement after “months of negotiation.”

President Joe Biden applauded their “historic agreement” in remarks delivered at the White House on Thursday, despite the fact that it doesn’t include everything he’s called for in such a package. (At several trillion dollars, Biden’s original American Families Plan was a far more sweeping social spending proposal.)

If passed, the spending package would be a notable victory for Biden and Democrats heading into the fall midterm elections.

But Manchin said Thursday that Biden had little to do with the deal, telling a local radio show that it was only hammered out between him and Schumer.

“President Biden was not involved,” Manchin said. “I was not going to bring the president in. I didn’t think it was fair to bring him in. And this thing could very well could not have happened at all. It could have absolutely gone sideways.”

Biden on Thursday thanked Schumer and Manchin specifically for the “extraordinary effort that it took to reach this result.”

What’s in the bill?

The 725-page bill, as currently written, would invest approximately $300 billion in deficit reduction and $369.75 billion in energy security and climate change programs over the next decade.

According to Schumer and Manchin, the bill “lowers energy costs, increases cleaner production, and reduces carbon emissions by roughly 40 percent by 2030.”

There are incentives for Americans to invest in clean energy, with tax incentives for energy efficiency improvements for their homes. There are also tax credits for individuals who buy electric vehicles.

The bill would continue pandemic-era expansions to Affordable Care Act subsidies through 2025 and allow Medicare to negotiate with drug companies to lower drug costs, which has long been a Democratic goal. Under the bill, drug manufacturers would be penalized for raising prices faster than inflation.

Medicare drug negotiation would begin in 2026 with 10 of the most expensive drugs eligible for negotiation. That number would increase to 15 drugs in 2027 and to 20 drugs by 2029.

The Inflation Reduction Act would be paid for implementing a 15% corporate minimum tax as well as collecting more through IRS tax enforcement, Democrats said. The legislation includes billions of dollars for taxpayer services, enforcement and modernization of the agency.

Manchin on how the deal came together

Manchin was pressed by West Virginia radio host Hoppy Kercheval on Thursday on why he changed course to go through with this bill, including the climate provisions, and despite a lengthy explanation and defense that the legislation will not be inflationary, he couldn’t explain the seeming about-face.

Manchin said Schumer was “mad” when he first paused the deal a few weeks ago, but he insisted he never “walked away” from negotiations.

After originally saying this month that he wanted to wait until the next set of economic data was released in August before moving forward on any legislation, Manchin said in his radio appearance Thursday that he directed his staff to scrub the bill down so there “can’t be one thing that you can say caused inflation.”

Still, he said he’s anticipating being criticized by Republicans over the 15% minimum corporate tax.

“Why is anybody or any corporation upset by not paying 15? So yes, I’m anxious to find out who they are,” he said. “Come forward.”

Some Republicans were also quick to criticize Manchin’s changing position, which they said left them in the lurch — having supported a separate computer chips bill when they thought the Democratic spending plan was dead.

Democrats hope to use a fast-track process known as reconciliation that will allow the legislation to pass by a simple majority vote.

In the evenly divided Senate, Democrats need their entire caucus — including Vermont independent Bernie Sanders, who has vocally criticized Manchin, and Arizona Democrat Kyrsten Sinema, who like Manchin has bucked other party priorities — to back the bill with Vice President Kamala Harris then breaking a tie.

The party also needs their members to stay healthy enough to vote in-person before the recess. There is no proxy voting in the chamber, as there is in the House.

Manchin is currently recovering from COVID-19 and Senate Majority Whip Dick Durbin announced Thursday, hours after the spending deal was released, that he too had tested positive for the virus and will isolate following federal guidelines.

Schumer told Senate Democrats on Thursday that they have the opportunity to get the legislation passed before the August recess — just days away.

“When we were in the minority for many years before this Congress, we talked often as a caucus about what we would do if we got the majority back,” he said, according to a Democrat in the room.

“We have now been in the longest 50-50 Senate in history,” he said. “It has been a wild ride and there have been many ups and downs.”