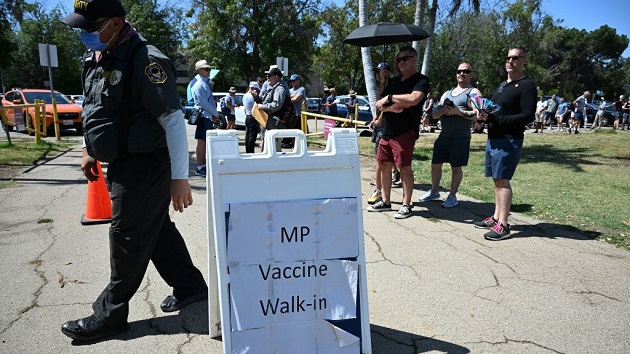 (WASHINGTON) — With new cases of monkeypox emerging rapidly across the country, the Biden administration is weighing whether to declare the growing outbreak a public health emergency, federal health officials said on Thursday.

Across the country, more than 4,600 cases of monkeypox have been confirmed across 48 jurisdictions, according to data from the Centers for Disease Control and Prevention. Globally, more than 20,000 cases have been reported — a total that health experts say is likely significantly undercounted.

“Every American should pay attention to monkeypox. Monkeypox is not COVID, but it is contagious. It is painful and can be dangerous,” Becerra said.

Ninety-nine percent of the cases reported domestically have been reported among people who were assigned male at birth, officials said, and the “vast majority” have been related to male-to-male sexual contact.

“We need everyone — whether it’s state and local health officials — who oversee health care and are responsible in their jurisdictions for health care, we need people who are at risk and we need all Americans to do their part and take responsibility to help us tackle monkeypox,” Becerra said.

However, federal officials had previously confirmed that other populations have been affected.

Last week, federal officials reported that two children in the U.S. had tested positive for monkeypox. In addition, a pregnant woman, who just recently delivered, has also contracted the virus, the CDC confirmed to ABC News on Thursday.

Although infections can occur through placental transfer to the baby, that does not appear to have happened in this case, the CDC’s Dr. John Brooks said during a webinar with the Infectious Disease Society of America.

The infant received immunoglobulin prophylactically, in an effort to boost the baby’s immune response, and “both mom and baby are doing well,” he said.

Officials from the Food and Drug Administration announced Wednesday that it had inspected and approved the manufacturing of the 786,000 more doses of JYNNEOS monkeypox vaccine for distribution in the U.S. Thus far, the U.S. has distributed at least 338,000 doses of the JYNNEOS monkeypox vaccine. Overall, in the coming weeks, a total of 1.1 million doses will have been made available.

“More than 1.1 million vaccines that we can say with confidence will be in the hands of people who need them over the course of the next several weeks,” officials said, adding that including doses already distributed, the federal government will have secured more than 6.9 million monkeypox vaccine doses by May 2023.

Pending additional funding from Congress, 11.1 million additional doses could also be made available.

“We don’t know what comes next and we need to be prepared for the spread into the larger population and have additional doses that we can turn to so that’s the reason why we would like to go ahead and get that additional 11.1 finished, have it available,” officials said.

Capt. Jennifer McQuiston, the CDC’s Deputy Director of Division of High Consequence Pathogens and Pathology, said officials have updated the federal plan for allocating doses to include two key factors: the total population of people at risk in a jurisdiction, and the number of new cases in each jurisdiction, since the last allocation.

“This update gives greater weight to prioritizing vaccine to areas with the greatest number of people at risk, which includes men who have sex with men who have HIV, or who are eligible for HIV prep, while still considering where we are seeing cases increased,” McQuiston said.

In addition to vaccinations in high-risk populations, testing, prevention, and treatment, as well as education and outreach, will all be critical tools to ensuring the outbreak is kept under control.