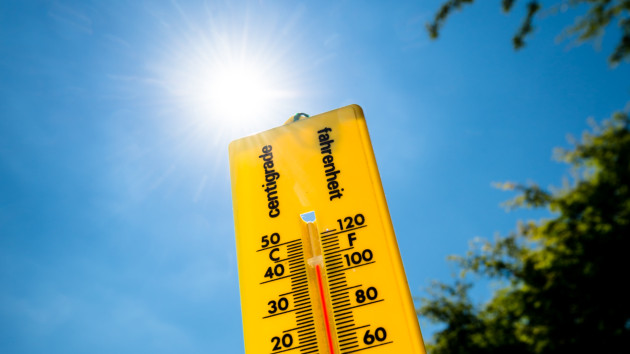 (NEW YORK) — Excessive heat warnings are in effect for parts of the Pacific Northwest on Wednesday as temperatures top 100 degrees.

The extreme heat is keeping its hold across the state of Washington. Seattle hit a record high of 94 degrees on Tuesday, while Spokane is expected to reach triple digits on Wednesday and Thursday.

The extreme heat will persist in the region for the rest of the week, according to the National Weather Service. The record for most consecutive days where temperatures were 95 degrees and up in Portland is six days– this heat wave could break or tie that record.

Heat alerts continue to be in effect for parts of California, Nevada and Idaho as their temperatures are expected to threaten records until Saturday.

Oregon’s Department of Emergency Management opened up misting stations and overnight cooling shelters on Tuesday to help residents deal with the dangerous heat.

Oregon Gov. Kate Brown declared a state of emergency on Tuesday for 25 of the state’s counties until July 31.

“With many parts of Oregon facing a high heat wave, it is critical that every level of government has the resources they need to help keep Oregonians safe and healthy,” Brown said in a statement. “I encourage everyone to take proactive steps to keep themselves and their families safe, including drinking plenty of fluids, taking advantage of cooling centers, and checking in on neighbors, friends, and loved ones.”

According to a 2021 study, heat waves in the Pacific Northwest would be “virtually impossible” without human-caused climate change.

Smoke from the Oak Fire near Yosemite National Park, which has burned more than 18,000 acres, is spreading into Northern California and southern Oregon. The fire, combined with the heat wave, is causing very poor air quality in the area.