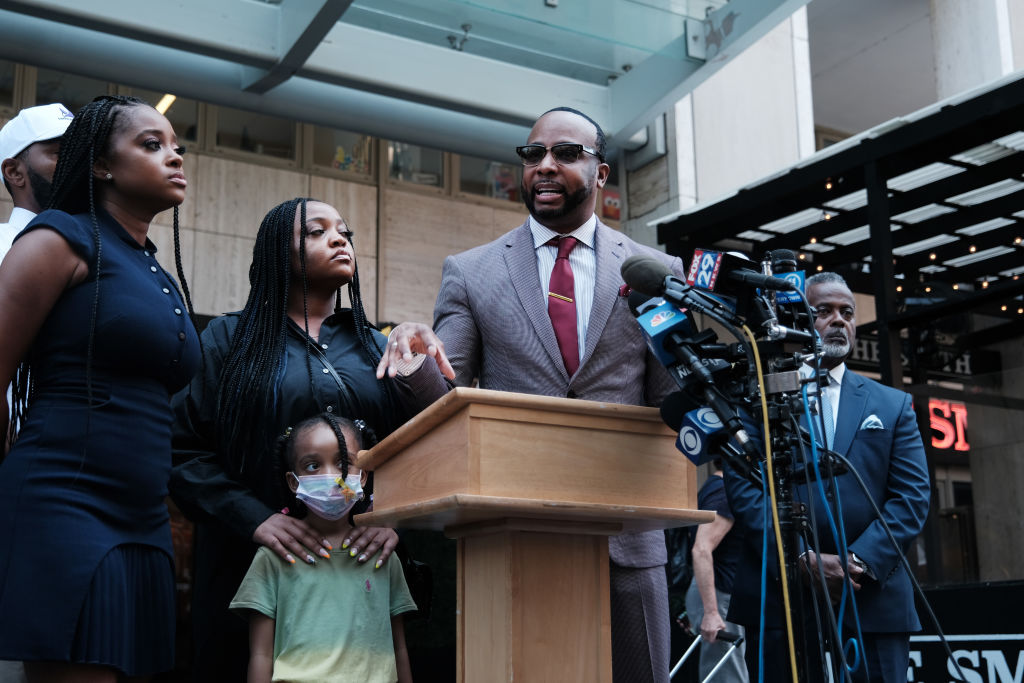 (PHILADELPHIA) — A proposed class action lawsuit has been filed by a Baltimore family against Sesame Place, alleging racial discrimination from the theme park.

The family said it decided to come forward after videos of a Sesame Place character seemingly waving off two young Black girls at the same park went viral this summer.

Quinton Burns said he took his daughter to the amusement park on Father’s Day and during a parade of characters, he claims she, too, was ignored.

“[We] watched in utter disgust as the viral videos of these beloved Sesame Street characters were discriminating against these innocent Black children and the videos began to flood the internet,” Burns’ attorney Malcolm Ruff said at the press conference Wednesday. “She was ignored amongst a sea of other young white children, who were able to interact, give hugs, high-fives, and love from these characters that are supposed to be a source of safety, a source of equity, a source of kindness.”

“We will review the lawsuit filed on behalf of Mr. Burns,” Sesame Place told ABC News in a statement Wednesday. “We look forward to addressing that claim through the established legal process. We are committed to deliver an inclusive, equitable and entertaining experience for all our guests.”

The suit claims that Sesame Place violated Section 1981 of the Civil Rights Act of 1866, which protects people against racial discrimination in the creation and enforcement of contracts. When the family bought tickets, they entered a contract with the amusement park and by allegedly being discriminated by costume character actors, this contract was “breached, solely because of the race of the children,” Ruff said.

Video of the encounter is set to be released in the coming days by the family’s attorneys, according to Ruff.

In the incident involving girls from another family that prompted the Burns family to come forward, a “Sesame Street” character named Rosita is seen giving high-fives to parkgoers as she walks down the line, before appearing to shake her head at and wave off the two girls as she walks away from them.

“#BabyPaige & her cute lil friends went to @SesamePlace this weekend to celebrate Paige’s 4th birthday & this is how #SesamePlace treated these beautiful Black children,” the tweet, posted by the apparent aunt, Jodi Brown, of the girl celebrating her birthday, read.

In the park’s initial statement, it said the performer portraying Rosita intended the “no” hand gesture in response to requests to hold children for a photo and did not intentionally ignore the girls.

The park said it has apologized to the family directly and has invited them for a meet-and-greet with the characters, as well as an in-person apology.

“We sincerely and wholeheartedly apologize to the Brown family for what they experienced,” park officials said in a previous statement to ABC News. “To be very clear, what the two young girls experienced, what the family experienced, is unacceptable. It happened in our park, with our team, and we own that. It is our responsibility to make this better for the children and the family and to be better for all families.”

The park said it will implement mandatory bias training so “our employees so that we can better recognize, understand, and deliver an inclusive, equitable and entertaining experience for all our guests. We have already engaged with nationally recognized experts in this area,” the statement read.

The legal team representing the family of the two girls in the video has called for the costumed performer to be fired.

Footage of other incidents with Sesame Place characters and Black children were posted by others alleging they were treated similarly.

Sesame Place is a licensed park partner of Sesame Workshop and is owned by Sea World.