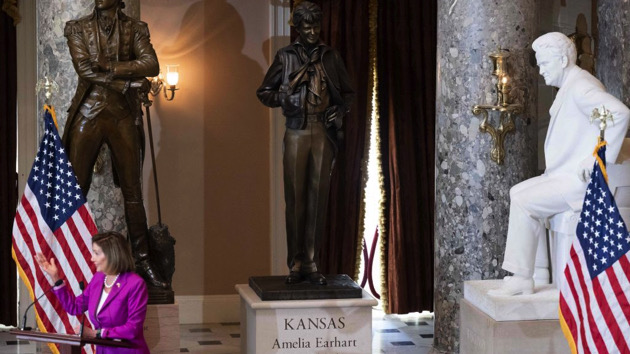 (WASHINGTON) – Nancy Pelosi was the guest speaker at the unveiling of a new statue at Statuary Hall of Amelia Earhart, the famous aviator born in Atchison, Kansas in 1897, who made history as the first female pilot to fly solo across the Atlantic Ocean.

The speaker of the house described Earheart as “an American who personifies the daring and determined spirit of our nation.”

“Who better than to represent our great state in Statuary Hall than Dwight D. Eisenhower and now a native daughter of Kansas, Amelia Earhart,” Kelly said. “A woman who showed all of us what it means to reach for the stars.”

The bronze statue took seven years for brothers George and Mark Lundeen to create. Because only two statues are allowed to represent each state, and only one can be placed in Statuary Hall, Earhart’s likeness replaced that of U.S. Senator John Ingalls whose statue has occupied the hall since 1907.

This is just the 11th statue of 100 that represents a woman. U.S. Representative from Kansas, Sharice Davids championed her as a pioneer of women’s rights.

“Female pilots used to be called ladybirds, sweethearts of the air, and because of Amelia Earhart back then, now, and into the future, women who fly planes are now called pilots,” said Davids.

U.S. Sen. Jerry Moran, R-Kan., described the unveiled piece as “a statue of a determined woman with short cut hair, a curious smile, a bomber hat in hand and a sunflower on her belt buckle.”