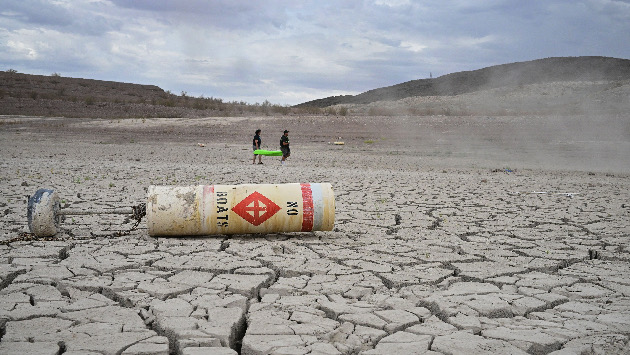 (LAKE MEAD, Nev.) — For the third time since May, human remains have been discovered in Lake Mead near Las Vegas as the water level in the nation’s largest reservoir continues to shrink to historic lows due to a decades-long drought, officials said.

The human remains were found around 4:30 p.m. Monday by a visitor to Swim Beach on the Nevada side of the lake’s west end, according to a statement from the National Park Service.

Park rangers responded to investigate and set up a perimeter around the area as the remains were recovered, officials said.

The park service said an investigation is underway. No further information was released.

Water levels in the reservoir, which straddles Nevada and Arizona, are so low they could soon hit “dead pool” status, in which the water is too low to flow downstream to Hoover Dam, officials said.

Satellite images released last week by NASA show side-by-side comparisons of Lake Mead, one taken on July 6, 2000, and the other more than two decades later on July 6 of this year. The images show waterways, which are fed by the Colorado River, have drastically thinned over the past 22 years as the surface of Lake Mead continues to hit its lowest levels since it was created in the 1930s.

A result of the diminishing water level is that bodies and human parts have been emerging.

On May 7, human skeletal remains were found near the lake’s Callville Bay, according to the National Park Service. The discovery came a week after the decayed body of a man was found stuffed in a steel barrel near the reservoir’s Hemenway Fishing Pier, more than 20 miles from Callville Bay, according to the Las Vegas Metropolitan Police Department.

The Clark County medical examiner’s office with the help of the FBI are still working to identify the remains recovered from the lake.

Homicide detectives from the Las Vegas Police Metropolitan Department said they suspect the man found in the barrel died from a gunshot wound. They believe the man was killed in the mid-1970s to early 1980s, based on his clothing and footwear.

Earlier this month, a World War II-era boat was discovered partially sticking out of the receding water roughly a mile from the Lake Mead Marina, which is also at the west end of the reservoir on the Nevada side, officials said.

The sunken vessel was identified as a “Higgins boat” used for beach landings during WWII and to survey the Colorado River decades ago, officials said.